Nash: 'Don't want to be a distraction' 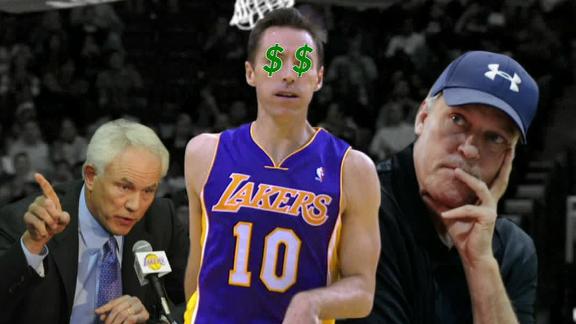 LOS ANGELES -- Steve Nash appeared to address critics of his recreational activities in a Facebook letter Friday night after receiving flak earlier this week when he posted a video of himself golfing.

The Los Angeles Lakers guard and two-time NBA MVP began the post by writing, "I definitely don't want to be a distraction, but I felt it best everyone heard from me in my own words."

Nash later added, "This may be hard for people to understand unless you've played NBA basketball, but there is an incredible difference between this game and swinging a golf club, hiking, even hitting a tennis ball or playing basketball at the park.

"Fortunately those other activities aren't debilitating, but playing an NBA game usually puts me out a couple of weeks. Once you're asked to accelerate and decelerate with [Stephen] Curry and Kyrie Irving it is a completely different demand."

Nash's letter comes after a video was posted on his Instagram account earlier this week of the 40-year-old hitting a golf ball at a driving range. The video has since been deleted.

As evidenced by the comments on the video, fans appeared upset at Nash for playing golf not long after the Lakers announced that he would be sidelined for the remainder of the season because of recurring back issues.

"There's a whole lot of people who don't understand the difference between golf and basketball," Scott said at the team's practice facility in El Segundo, California. "Unfortunately, you have people like that. The guy is hurt and can't play this year. But that doesn't mean he can't enjoy himself and have some fun while going through rehab and everything else. It probably doesn't look good [publicly], but relax."

Health troubles sidelined Nash for all but 15 games last season. And because of back, knee and hamstring issues, Nash played in just 65 of a possible 164 regular-season games the past two seasons with the Lakers.

"I understand why some fans are disappointed," Nash wrote in his letter Friday. "I haven't been able to play a lot of games or at the level we all wanted. Unfortunately that's a part of pro sports that happens every year on every team. I wish desperately it was different. I want to play more than anything in the world. I've lost an incredible amount of sleep over this disappointment."

Nash decided not to retire this offseason and instead returned to the Lakers, who will pay him about $9.7 million in the final year of a three-year, $28 million deal. Nash said this summer that he believes this season -- his 19th -- will be his last.

He expanded on his health issues in his letter Friday.

"I have a ton of miles on my back," Nash wrote. "Three bulging disks (a tear in one), stenosis of the nerve route and spondylolisthesis. I suffer from sciatica and after games I often can't sit in the car on the drive home, which has made for some interesting rides.

"Most nights I'm bothered by severe cramping in both calves while I sleep, a result of the same damn nerve routes, and the list goes on somewhat comically. That's what you deserve for playing over 1,300 NBA games. By no means do I tell you this for sympathy -- especially since I see these ailments as badges of honor -- but maybe I can bring some clarity."

He concluded his letter by writing, "I'm doing what I've always done which is share a bit of my off-court life in the same way everyone else does. Going forward I hope we all can refocus our energies on getting behind these Lakers. This team will be back and Staples [Center] will be rocking."