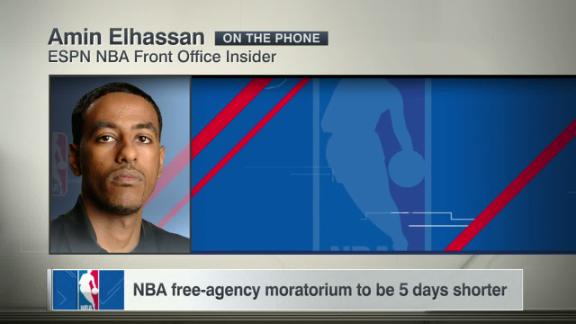 The NBA and NBA Players Association have agreed to shorten this summer's free-agent moratorium by five days, a person with knowledge of the decision told The Associated Press.

New deals struck this summer may now be signed on July 7 at 12:01 a.m., according to the person, who spoke on condition of anonymity because neither side announced the move publicly.

Teams were informed of the decision on Thursday. Yahoo! Sports also reported the news.

Until now, this summer's moratorium was scheduled to run through July 11, with players and teams able to execute new deals on July 12. The moratorium -- which exists in large part to allow the league time to calculate the exact amount of the salary cap and luxury-tax figure for the coming season -- will run from July 1-6.

Both the league and the union had to sign off on the switch, which could help both sides. Teams and free agents can agree to deals during the moratorium, but nothing can be signed until it ends. By shortening the moratorium, the league and its teams will have the luxury of getting deals done more quickly -- and it could help prevent a situation like the one that overshadowed free agency last summer.

DeAndre Jordan agreed during last summer's moratorium to sign with the Dallas Mavericks, then changed his mind several days later and ultimately stayed with the Los Angeles Clippers. While changes of heart like that could still occur, of course, teams probably won't complain about having the ability to get signatures on contracts more quickly going forward.

Free agency is expected to be particularly hectic this summer, with Durant headlining a list of players who could be on the move. Others who could become free agents include LeBron James, Dwyane Wade, Al Horford, Pau Gasol, Mike Conley, Hassan Whiteside and DeMar DeRozan.