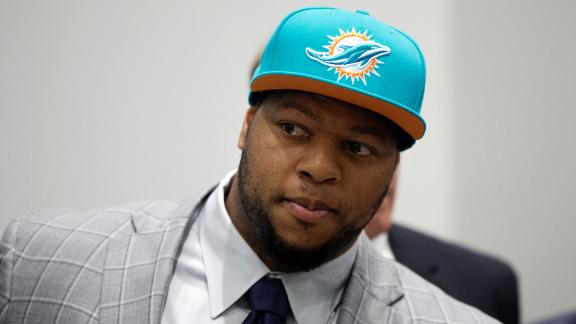 The Dolphins tweeted out a picture of Suh signing his contract.

"Today's going to be a great day, and there's many more to come after that," Suh said Wednesday.

Suh arrived in Miami on Wednesday morning to put the finishing touches on the contract, which was first reported by ESPN NFL Insider Chris Mortensen on Sunday.

The agreement includes an NFL-record $60 million guaranteed, and it's a wise investment, according to Omaha billionaire Warren Buffett. When he heard about the deal with the former Nebraska Cornhuskers star, Buffett phoned Dolphins owner Stephen Ross.

"Warren said, 'Congratulations, you're getting a great person. Take good care of him, because he's going to mean a lot to you,' " Ross said.

The Dolphins need Suh to help their 24th-ranked run defense. Last year, Suh anchored the Detroit Lions' defense, which was No. 1 against the run.

The Dolphins finished 8-8 the past two seasons under head coach Joe Philbin. They hope a game-changing player like Suh can get them into the playoffs for the first time since 2008.

The Lions decided against using the franchise tag on Suh, as doing so would have cost the team close to $26.9 million to tie him up for the 2015 season.

The Lions had such a high number on Suh's franchise tag option because of contract restructures that left him with a cap number of $22.4 million for the 2014 season. That is what escalated the tag number to such a high amount.

"For me, I had a great time in Detroit. I think the fans are absolutely exquisite to me, especially the people in the organization the last five years," Suh said. "For me, it was nothing short of being amazing. I have a lot of long-lasting relationships that I have in Detroit and I will always have those people. I really enjoyed that time there."

The 28-year-old Suh was taken with the No. 2 pick in the 2010 draft by Detroit after an All-American career at Nebraska.

With the Lions, Suh was a dominant force in the middle for five seasons, making the Pro Bowl four times and being named first-team All-Pro four times. He has also played in 78 of 80 regular-season games for Detroit while making 238 tackles with 36 sacks, 13 pass breakups, two forced fumbles, a fumble recovery and an interception.

The Lions and Suh spent most of last offseason trying to negotiate a new contract, but the team halted negotiations at the start of training camp for the 2014 season because they said they wanted to focus on football. Throughout last offseason, Mayhew and Lewand said often they were confident they would sign Suh to a new deal.

With Suh comes one of the most dominating talents in the game, but also a player who has a history of being fined for player-safety violations. The only two games Suh missed in his career were due to a suspension after stomping on then-Green Bay offensive lineman Evan Dietrich-Smith. He was also initially suspended for Detroit's playoff game against Dallas this season before his suspension was overturned and replaced with a $70,000 fine for stepping on the calf and ankle of Green Bay quarterback Aaron Rodgers.

Dolphins coach Joe Philbin, for his part, said he welcomed Suh. "We've had some really good initial meetings here, and he seems like a bright, intelligent guy,'' Philbin said. "We're looking forward to starting a new chapter here in Miami."

Ross said the Dolphins followed the rules in their negotiations with Suh, although the NFL is looking into whether some teams settled on contract terms with free agents earlier that permitted.

Agreements were prohibited before Tuesday afternoon, and news of a framework for Suh's deal was first reported Sunday.

"They may be looking into it, but we don't think we did anything wrong,'' Ross said.

ESPN.com Lions reporter Michael Rothstein and The Associated Press contributed to this report.

Suh Excited To Get To Work With Dolphins
Pro Bowl DT Ndamukong Suh expresses his excitement to join the Dolphins after finalizing a $114 million contract with Miami.

The Suh Effect
Max Kellerman and Marcellus Wiley of "SportsNation" discuss whether Ndamukong Suh can give the Dolphins the confidence they need to be successful and possibly make the playoffs next season.