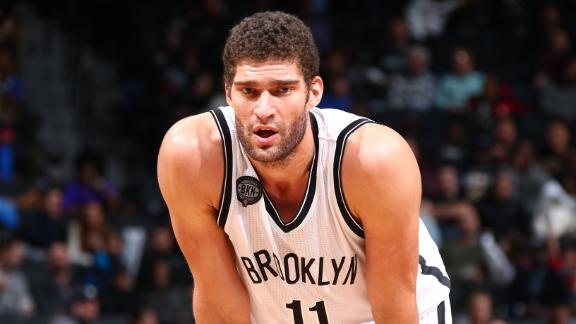 The Brooklyn Nets and Oklahoma City Thunder are involved in discussions about a trade involving Brook Lopez and Kendrick Perkins, according to sources.

The two sides had been engaged in talks about a three-way trade that would have also involved the Charlotte Hornets shipping out Lance Stephenson; however, sources said the Hornets are no longer involved in the deal.

Sources on Thursday night confirmed a USA Today report that Oklahoma City would send Perkins to the Nets in a potential deal. In earlier trade discussions, the Nets and Thunder had talked about a potential deal involving Lopez and Perkins, among other players, according to sources.

Brooklyn also has had trade talks with the Miami Heat about Lopez, sources said.

Lopez was at the team's shootaround Friday morning in Washington, D.C., but issued a no comment on the swirling trade talks. The Nets will face the Wizards on Friday night.

The Nets made it known to other teams in early December that Lopez, point guard Deron Williams and swingman Joe Johnson were available via trade, and they recently had talks with the Sacramento Kings about Williams, according to sources.

The Nets (16-23) have lost seven straight games, and general manager Billy King has been active in looking to shake things up.

Sources tell ESPN.com's Marc Stein that the Nets strongly covet Minnesota forward Thaddeus Young and, if they commit to trading Lopez to the Thunder, are likely to try to recruit the Wolves as a third-team participant or simply offer Perkins' expiring deal for Young in a separate transaction.

Lopez, 26, is averaging 14.6 points and 6.3 rebounds per game with 50.4 percent shooting. He has been coming off the bench recently. He will make $15.7 million this season and has a $16.7 million player option for 2015-16. Lopez, the longest-tenured member of the Nets, has a history of foot injuries.

Information from ESPN.com's Mike Mazzeo contributed to this report.

Proposed Three-Team Deal Dead
Amin Elhassan and Antonio Davis discuss the three-team trade between the Hornets, Thunder and Nets -- which would have involved Lance Stephenson -- being dead. But the Nets and Thunder are still discussing a move for Brook Lopez.