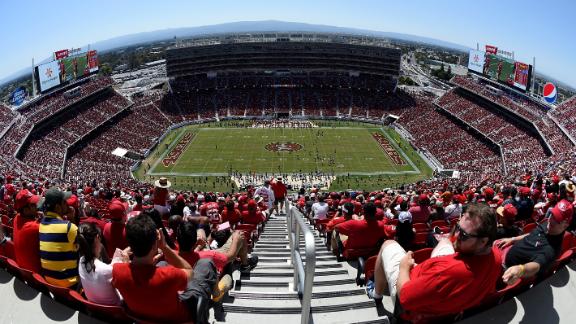 At a cost of $641, the San Francisco 49ers now have the highest estimated price in the NFL for a family of four to attend a game.

Rising to the top shouldn't come as a surprise to 49ers fans, as the new Levi's Stadium -- which had personal seat licenses ranging from $2,000 to $80,000 per seat -- was the key contributor to the rise. The average ticket price of a general seat (excluding club seats or suites) rose 40 percent in a year to $117 per seat, per game.

That ticket is the second-most expensive in the league, behind only the New England Patriots, whose average ticket price is $122 this year, TMR says.

Taking home the Lombardi Trophy led to a 13.4 percent increase in ticket prices for the Seattle Seahawks, behind only the 49ers as the biggest year-over-year change. Still, the Seahawks' average ticket of $80.77 is below the league average of $84.43.

Three teams that did not make the playoffs last season lowered their tickets prices significantly -- the Miami Dolphins (down 8.4 percent), Atlanta Falcons (down 6 percent) and New York Jets (4.2 percent).

Despite landing Johnny Manziel and subsequently seeing the quickest rise in new season-ticket sales after the draft, the Browns did not raise prices, and at $54.20, they have the lowest average ticket price in the league.

The cheapest team parking is $11 at Detroit Lions games. The Cincinnati Bengals, at 36 cents an ounce, have the least expensive beer, and the cheapest hot dog is in New England, where the Patriots charge $3.75.