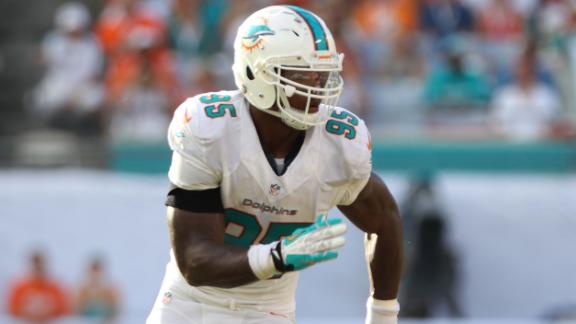 Jordan, the No. 3 overall draft pick in 2013, recently said he had gained 17 pounds of muscle compared to last season, when he didn't get much playing time because there were concerns about his strength.

He posted just 26 tackles and two sacks in limited playing time as a rookie.

"We were disappointed to learn about Dion's suspension," Dolphins coach Joe Philbin said. "Dion has accepted responsibility for his actions and is committed to improving, both on and off the field, in preparation for the upcoming year."

Jordan's suspension hurts Miami's depth at defensive end. The Dolphins were planning to use Jordan as a pass-rushing specialist and primary backup to Pro Bowl defensive end Cameron Wake and starter Olivier Vernon.

Jordan's first game off suspension will not be until Week 6, when Miami hosts the Green Bay Packers. The Dolphins have a bye in Week 5.

"I recently learned from the NFL that I tested positive for stimulants that are banned under the NFL policy," Jordan said in a statement. "I worked carefully with my advisors and the union to investigate the test results, and I take full responsibility for the test results.

"I'm very sorry for the impact of this situation on my teammates, coaches, Stephen Ross, the entire Dolphins organization, fans and my family as well. I will continue to work extremely hard during training camp and preseason. During the suspension, I will stay in top shape and will be ready to contribute upon my return."

The summer of bad news continues for the Dolphins. In addition to Jordan, Miami will be without Pro Bowl center Mike Pouncey, who recently had hip surgery and is expected to miss three to four months.

The Dolphins went 8-8 last season and are aiming to make the playoffs for the first time since 2008.