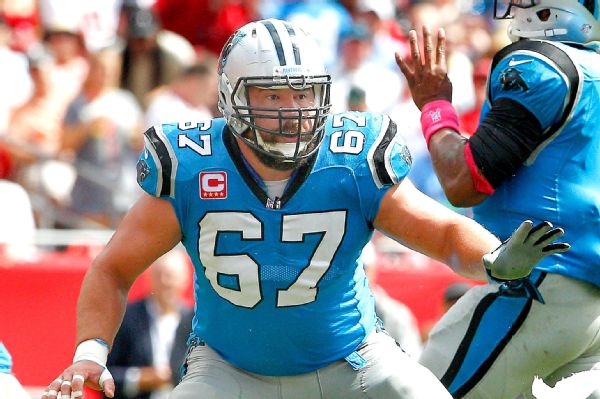 Kalil missed three of the past four games with a shoulder injury and Gradkowski on Sunday at Oakland reinjured his knee that forced him to miss a start in Week 11.

The Panthers (4-7) will go into Sunday's game at Seattle with Tyler Larsen orRyan Wendellas the likely starter. Larsen never played center in an NFL game before replacing Gradkowski on Sunday.

He also started in seven of 12 postseason games during his career.

Carolina also signed free agent tackle Dan France. Right tackle Daryl Williams suffered an ankle injury in Sunday's loss to the Raiders and was wearing a walking boot after the game. Right guard Trai Turner, who hadn't played right tackle since high school, replaced Williams and is a candidate to start at tackle against Seattle.

If the Panthers keep Turner at guard, Chris Scott also is a candidate at center. He finished Sunday's game at guard, but he replaced Kalil two weeks ago after the five-time Pro Bowl selection re-injured his shoulder against New Orleans.

Only left guard Andrew Norwell is at the same position on the line where he began the season.

Coach Ron Rivera on Monday agreed the situation was "position catastrophic,'' as general manager Dave Gettleman described it in 2014 when Carolina had a rash of injuries on the line.

"It's as catastrophe as you can get when you look at the losses we've had this year,'' Rivera said.

The new players will join Carolina at San Jose State, where the team is preparing for the Seahawks. Rivera opted to keep the team on the West Coast after the Oakland game to avoid consecutive cross-country flights.