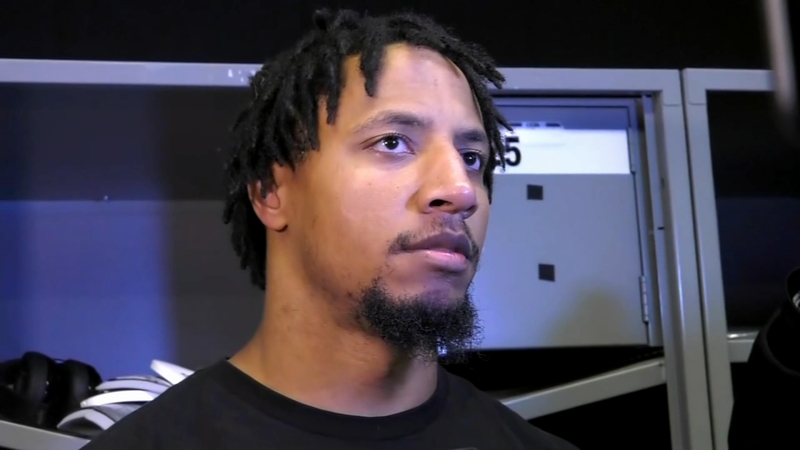 PHILADELPHIA -- Eric Reid and Malcolm Jenkins turned the fight for racial and social justice into a skirmish on the field. Reid then went on offense with his postgame comments, calling the Eagles safety and co-founder of The Players Coalition "a sellout."

Reid split from the coalition last year because Jenkins had excluded Colin Kaepernick from meetings, and asked players if they would stop protesting during the national anthem if the NFL made a charitable donation to causes they support. Reid, who signed with the Carolina Panthers in September, said he believed he no longer had shared interests with the socially-active coalition and would continue on his own path with the unsigned Kaepernick, who was the first player to sit and then kneel during the anthem to protest racism and police brutality.

"We believe a lot of players should have stepped up for Colin," Reid said Sunday after the Panthers beat the Eagles 21-17. "I believe Malcolm capitalized on the situation. He co-opted the movement that was started by Colin to get his organization funded. It's cowardly. He sold us out."

Jenkins took the high road when told in the Eagles' locker room of the criticism.

"I'm not going to get up here and say anything negative about that man," Jenkins said. "I respect him. I'm glad he has a job. I'm glad he's back in the league. I'll leave it like that."

Reid, who was not supposed to be at midfield, and Jenkins jawed at each other shortly before kickoff.

Reid continued his tradition of taking a knee during "The Star-Spangled Banner," while none of his Carolina teammates joined him or stood near him at midfield. Reid is trying to call attention to social and racial injustice.

"It's systematic oppression which is what I'm protesting and neocolonialism," he said. "Man, it keeps happening."

Reid has essentially accused of Jenkins of running The Players Coalition through a dependence on the NFL. The league is committing $90 million over the next seven years to social justice causes in a three-segment plan that involves players.

Sharrie Williams talks to Malcolm Jenkins about being a champion for social issues.

Reid said Jenkins' goal was to always have the NFL fund the coalition.

Reid insisted he didn't set out to confront Jenkins. But that's what happened before kickoff. Reid, playing his third game with the Panthers, had to be restrained by players and coaches and stared down Jenkins during player introductions. Reid continued to pop off toward the Eagles sideline after an early tackle, clearly fired up by his showdown with Jenkins.

Reid hit Carson Wentz well after a handoff and Zach Ertz gamely tried to defend his QB. Ertz charged at Reid, who put his head down and flipped the tight end with a WWE-style slam onto the turf. Both players received personal foul penalties.

"He ran up on me," Reid said. "That's a football play. Whenever there's an exchange, the quarterback is a running back."

Reid, signed by the Panthers when safety Da'Norris Searcy suffered a season-ending concussion, wore a T-shirt reading "I KNOW MY RIGHTS" in the locker room and refused to ease up on Jenkins or apologize for wiping out Ertz.

Jenkins said he was glad Reid had returned to the league, and his play has proved it - Reid appeared to intercept Wentz's overthrown pass to seal the win, but the play was overturned on a video review.

"There's no question about his talent and what he deserves," Jenkins said. "I definitely think his stance was the reason he was on the street for as long as he was. I've maintained that the entire time he was out of the league and I still maintain that now."