Pat Riley has met with LeBron, others 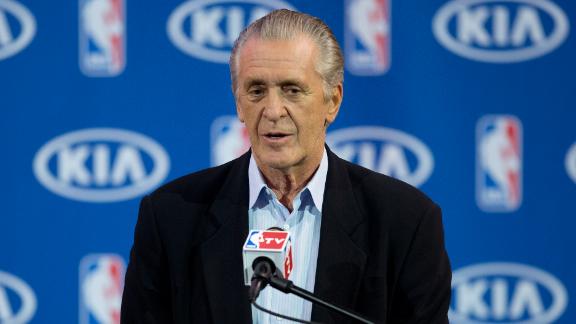 MIAMI -- Part of Pat Riley's pitch to get LeBron James, Dwyane Wade and Chris Bosh to extend their largely successful run together with the Miami Heat won't involve throwing his collection of championship jewelry on a table to remind them what they can accomplish.

"I don't think we've got to recruit Chris, Dwyane or LeBron," Riley said Thursday. "I'm not dropping rings on the table for those guys. They could drop their own."

With that said, the Heat team president remains optimistic his core players will eventually regroup from a dominating defeat against the San Antonio Spurs in the NBA Finals and realize there's still a prosperous future in Miami should they return intact.

During an annual season-ending news conference that lasted nearly an hour, Riley addressed several issues surrounding his team, including the possibility that James, Wade and Bosh could all opt out of the final two seasons of their contracts to become free agents on July 1.

Riley said he has met with all three players over a two-day span this week and relayed that he and team owner Micky Arison are willing to do "whatever it takes" for them to move forward and contend for championships for several more seasons.

Riley's media session came two days after James had his exit interview with the team and told reporters he would take a vacation with his family in the coming days before he decides how to proceed with his next decision.

James did indicate that he welcomed the opportunity to become a free agent and have the same level of flexibility he was afforded in 2010, when James signed with Miami after his first seven years in Cleveland. He has since led Miami to four consecutive trips to the Finals and two championships.

Wade elected not to speak with the media after his exit interviews Tuesday but has previously said he plans to spend his entire career with the Heat. Bosh said Tuesday he doesn't see any reason why the Heat's Big Three wouldn't continue together in Miami.

Riley said he has already constructed a contingency plan for whatever decisions are made by his top players. He also expressed frustration from the outset of his session with rampant speculation in the media and around the league that the Heat are on the decline and need to break up their core. Riley opened with a rant and pointed out the years Magic Johnson's Lakers, Larry Bird's Celtics and Tim Duncan's Spurs didn't win titles despite all championships they stockpiled during dynastic runs.

"I think everybody needs to get a grip," Riley said. "This stuff is hard. You have to stay together and find the guts. You don't find the [exit] door and run out of it."

The Heat could be headed for a complete overhaul this summer, with 14 of their 15 players either at the end of expiring contracts or in position to opt out and become free agents. After four years of reaching the Finals and playing well into June, Riley said a common theme from the players during the exit interviews was that the mental fatigue ultimately played a major factor.

"I understand that. I don't accept it," Riley said. "Maybe they didn't know how to prepare themselves for four years in the Finals. If that's something as an excuse or to use this as a crutch ... I saw that in the team. I saw the mental fatigue at times. I thought we were hitting a stride when we beat Indiana in Game 6 [of the Eastern Conference finals]. I said we're in a good place. Then we ran into a buzz saw."

The Heat lost to the Spurs in five games, with San Antonio's four victories coming by 15 or more points in one of the most lopsided Finals in NBA history.

Riley said his plan was to allow James, Wade and Bosh to get away for seven to 10 days and cope with the disappointment before they all get together to go over their options.

The players have until June 29 to notify the Heat of their plans to either opt out or roll into the fifth season of their respective six-year contracts. James, Wade and Bosh are each slated to earn at least $20 million next season. If they all opt in, Riley said the Heat would still have the flexibility to shore up the supporting cast by using a midlevel exception and two minor trade exceptions.

Should the Heat's top players opt out, Miami could have at least $51 million in salary-cap space to retool the roster and possibly add quality free agents alongside James, Wade and Bosh. Riley addressed speculation that the Heat are maneuvering to bring in a fourth major free agent -- with pending free agent Carmelo Anthony the center of most rumors -- if James, Wade and Bosh chose to take drastic pay cuts.

"That's a pipe dream," Riley said, without mentioning the name of a potentially targeted player. "But everyone thought 2010 was a pipe dream. That's not where we're headed."

Riley said he didn't anticipate presenting a plan in which James, Wade and Bosh would take huge pay cuts should they opt out of contracts. He would be open to any ideas they had and suggested that it was the three players who hatched the plan in 2010 to take slightly less money than allowed on maximum deals to create salary space to add Mike Miller and Udonis Haslem.

The initial plan, Riley said, is for this team to stay the course.

"It's not about options. It's not about free agency," Riley said. "It's about what we've done over four years. It's about looking around the room now and seeing who is going to stand up. Those four years we've had with LeBron, we're hoping to turn them into eight or 10. We're not walking around on eggshells anymore."

Riley insists he's not overcome with pressure or anxiety.

"How can we keep the guys together?" Riley said. "We're prepared. We've got the main thing all written up. Whatever it takes to keep them together, we're ready for. Let's stay here and try to keep this thing going."

Riley: Heat Need To Retool, Not Rebuild
Heat president Pat Riley addressed the media to discuss the future of the Heat.