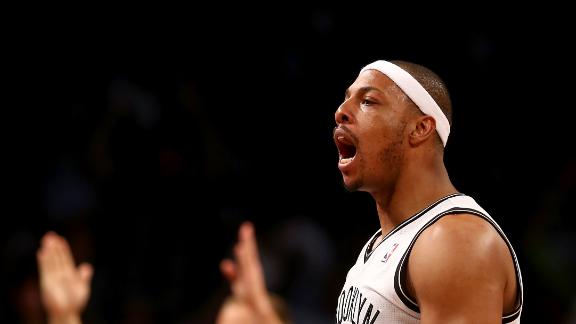 EAST RUTHERFORD, N.J. -- Prior to Game 2 of their playoff series against the Miami Heat, Brooklyn Nets veteran Paul Pierce went to coach Jason Kidd and asked for the responsibility of guarding LeBron James.

Pierce knows James' tendencies better than any other Net after numerous playoff battles, and he wanted the Nets to see that he isn't intimidated by James or afraid of the Heat.

After helping slow James down over the last three quarters of the Nets' 104-90 win in Game 3, Pierce said the Nets don't fear the Heat and he wants Brooklyn to play with the attitude and belief that the two-time defending champions are "not unbeatable."

"You know you've got to have that type of mental [approach] when you're going against a juggernaut," Pierce explained about establishing a no-fear mental edge following Nets' practice. "When you go against the best ... a lot of series are won on fear factor, or the non-belief. When you have that non-belief, then you have no chance.

"What I try to do in this locker room and with my teammates is just try give them belief -- that we can beat this team. They're not unbeatable. You've got to have that mental [approach] if you're trying to get over that mountain that you're trying to climb."

James bristled at Pierce's talk, but agreed with Pierce's point.

"Words don't win the game, you've got to go out and play. Why should there be a fear factor, it's just basketball," James said Sunday. "We're not trying to win a war here, it's just basketball. We're all grown men, who cares about who is fearing who. We've never been a team that talks, we don't get into that. We've never been a bulletin board team. We just want to play the right way and give ourselves a chance to win."

Pierce is doing everything he can to inject his championship swagger into the Nets. Following the Nets' win over the Heat on Saturday, Pierce said emphatically that Brooklyn let Miami know "that we wasn't going to panic [down 2-0 in the series]. We wanted to show them we're not scared of them."

And the veteran is trying to show his team that through his actions by taking on the unenviable task of defending James.

"I've definitely tried to do that," Pierce said. "I went to J-Kidd [for] Game 2 and said I want that assignment. ... I think I've guarded him more than anybody in this gym. I know his tendencies a little bit more and I just try to step up in that role and try to lead that way."

Pierce has played James head-to-head 62 times. He knows his tendencies and has had success in this series getting James to settle for perimeter shots.

According to ESPN Stats and Information, nine different Nets players guarded James on his field-goal attempts in Game 1 as the Heat star finished with 22 points while shooting 10-for-15 from the field.

In Game 2, Pierce guarded James on 42 percent of his plays and limited him to eight points in that second Heat win. The average distance of James' field-goal attempts with Pierce on him was 18.6 feet compared to 9.6 against all other Nets defenders. James attempted one drive on Pierce during that win, according to ESPN Stats and Information.

In Game 3, James got off to a hot start, hitting 6 of his first 7 shots and scoring 16 points in the first quarter. But James went 2-for-8 the remainder of the game and finished with 28 points.

"[Pierce] is doing a great job," Andray Blatche said. "He's forcing him to take shots, LeBron is trying to back him down, Paul is a strong guy himself, so he is just playing cat and mouse with him."

Perhaps it's no coincidence that Miami's shot attempts near the rim have gone down with each game from 29 in Game 1 to 18 in Game 2 to 13 in Game 3, according to NBA.com.

Outside of that first quarter in Game 3 when he made 4-of-5 shots against Pierce, James is shooting 4-of-11 against the former Celtic swingman in the series, including 0-for-2 over the last three quarters of Game 3.

After the Game 3 loss, James didn't leave the court immediately, choosing to take in a long look toward the Nets bench as fans in the Barclays Center celebrated the victory. It was as if James was taking a mental note of the moment and already beginning to motivate himself for Game 4.

James, however, displayed no concerns about seeing the Heat's lead in the series cut to 2-1.

"I feel real good about our team, why wouldn't I? I'm on the team," James said.

Pierce is looking forward to the challenge.

"I don't have the offensive load that I had in the past where I set on having to carry us all the way offensively and then take the best defensive assignment," Pierce said. "Now I can reserve a lot of energy toward trying to defend him. When the time comes for me to score, then I'll do that also."

Information from ESPN.com's Brian Windhorst contributed to this report.