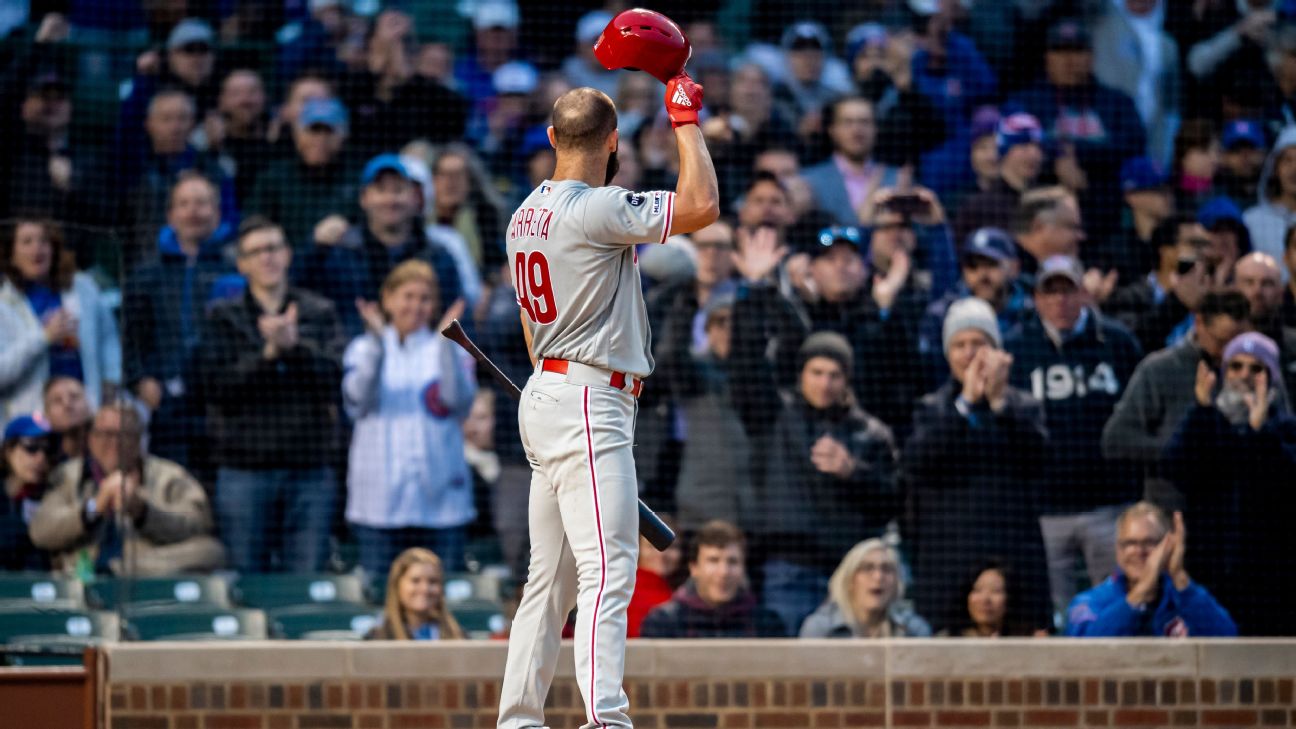 CHICAGO -- ThePhiladelphia Phillies' Jake Arrieta no longer calls Wrigley Field his home park, but the denizens there haven't forgotten their former ace, and he hasn't forgotten them.

On Monday, Arrieta made his first start in the Friendly Confines since signing with Philadelphia before the 2018 season. In what turned out to be a 5-4 Phillies win in 10 innings, Arrieta worked around trouble for six innings, allowing just one run, and departed with Philadelphia ahead 3-1.

The Phils blew that lead but came back to tie the game in the ninth on Jean Segura's RBI single and win it in extra innings onJ.T. Realmuto's home run. For Arrieta, that's what really mattered.

"Great atmosphere as always," Arrieta said. "Two really good teams going at it. Both teams showed multiple signs of why we're both leading their division. Tough outs top to bottom in that lineup."

Arrieta's name spurred a nice round of cheers when lineups were announced, and again when he toed the rubber to begin the bottom of the first. But the real love-fest erupted when Arrieta stepped to the plate in the third inning and his days in Chicago flashed back vividly. Another nice round of applause gathered momentum and soon turned into a full-blown standing ovation. Arrieta stood off to the side for 30 seconds or so, waiting for the clamor to die down. When it didn't, he doffed his batting helmet in acknowledgment.

"That moment for me was when the fans all stood on their feet and gave me a pretty nice round of applause," Arrieta said. "That was something that really brought back some great memories of getting the same sort of ovation on pretty much a nightly basis. I'm very appreciative of that. I can't say thank you enough to the city of Chicago, I really can't."

It's a ritual as old as baseball itself. A beloved ballplayer moves on to a new team, by his choice or otherwise. The next time he appears in his former stomping grounds, he is received warmly unless the circumstances of his departure were acrimonious. Arrieta's return was something beyond that, almost a commemoration of a time no one forgets.

"It felt great," Arrieta said. "It was something that I experienced pretty much from day one here, with the fan base, and Cubs fans all across the country and all across the world. They really respect and appreciate what guys are able to do for them. It means a lot, it really does. I'll never forget this city, the fan base and organization."

"Brings back a lot of memories of what we were able to do as a team," Arrieta said. "From [2013] all the way through [2017]. It felt good to pitch here again. Really, really enjoyed the opportunity, [especially since] I missed both series against these guys last year. It was a lot of fun, it really was."

The last time Arrieta toed the rubber at Wrigley Field was when he beat the Dodgers in Game 4 of the 2017 National League Championship Series. Even then, he knew it was possibly his last time taking the mound there as a Cub; he talked about looking around to let the moment sink in.

The Cubs went on to lose that series, and after the season, Arrieta became a free agent. After the kind of long winter wait that has been the norm in recent Hot Stove seasons, Arrieta inked a three-year, $75 million contract with Philadelphia that has a player option after this season and team options after subsequent two seasons.

Meanwhile, at the end of that same Hot Stove season, the Cubs signed free-agent starter Yu Darvish to a six-year, $126 million deal. Though it's more complicated than saying the Cubs chose Darvish over Arrieta, that's how it became perceived in many corners. That Darvish has struggled with injuries and control problems hasn't helped matters from a Cubs perspective.

So it was no surprise that when fortune ended up pitting Arrieta against Darvish in Arrieta's return to Chicago on Monday, it generated more media and fan attention than usual for a Monday night game in the third week of May. But for Arrieta, the identity of the opposing pitcher didn't really matter.

"I think that's maybe more just from a fan and a media perspective," Arrieta said. "For me, it was obviously a very meaningful start, not only with two first-place teams going at it and trying to separate ourselves from the Braves and other teams in our division, but facing these guys for the first [time] as a visiting player. It meant a lot. But as soon as I went out there, it was kind of like any other start."

Still, it was anything but just another outing for the Phillies' righty. Even as he pursues another championship with his new team, the more time that passes since the historic title with his old team, the more appreciation he feels for the experience.

"The longer I'm kind of away from it," Arrieta said, "the more I do appreciate it. In the moment, it's not necessarily tough to appreciate it, but [now] you're able to reflect a little bit deeper and put some more time and thought into it. It really, really sinks in what we were able to do here overall as a team and an organization, and the strides we took to get where we were. And you see what they're able to continue to do as an organization. I'm proud of those guys over there still." 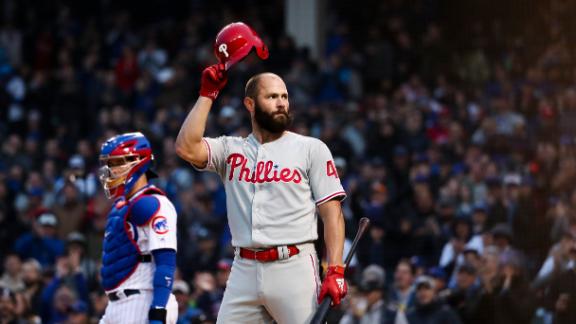