Report: Calipari has advice for NCAA 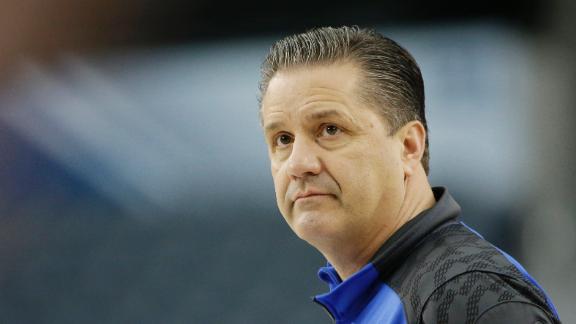 ESPN
In his new book, Kentucky coach John Calipari likens the NCAA to the dying Soviet Union and admonishes college sports' governing body for not changing with the times, according to a report.

"The situation reminds me a little of the Soviet Union in its last years. It was still powerful. It could still hurt you. But you could see it crumbling, and it was just a matter of time before it either changed or ceased to exist," Calipari writes in his book, according to a report in The Wall Street Journal.

The outspoken coach has numerous ideas as to how to reform the college experience from the athlete's standpoint, but he says his suggestions have fallen on deaf ears from the NCAA.

"I think we could have gotten somewhere with me as the point man, but the NCAA was not interested in my help," Calipari said, according to the WSJ. "The message I got, between the lines, was, 'No, not you. Not Calipari. We don't want him involved.'"

Among his ideas presented in "Players First: Coaching From the Inside Out," which is scheduled to be published on Tuesday, the WSJ reported that Calipari presents a 13-point plan for NCAA reform. Among them:

• Athletes should be able to accept loans up to $50,000 against future earnings;

• If a coach leaves an institution, players should be able to transfer from that program without having to sit out a season;

• Athletes should be allowed one round-trip flight home every year.

"I believe the tide is turning. The NCAA will soon have to reform itself or it will not remain the dominant force in college athletics," the WSJ quoted Calipari from the book.

The WSJ reported that Calipari writes that he wants the NCAA to relinquish some of its power -- to conferences, to schools and/or to a new entity that has the power to subpoena. He writes that there is just too much on the NCAA's plate to oversee, and he uses players' meal allotments as an example.

"Is the NCAA afraid we're going to make them fat? Give them too much ice cream and chocolate cake?" he writes. "The whole thing really defies sanity."

But the NCAA still has a place in college athletics, Calipari writes, as long as it changes with the times.

"I don't endorse all of what the NCAA critics say," he writes. "But I don't think the organization -- and the institution of college sports -- would be under such attack if we made some of the common-sense changes that I, and many others, are recommending."