Roger Federer: I will be 'contender' 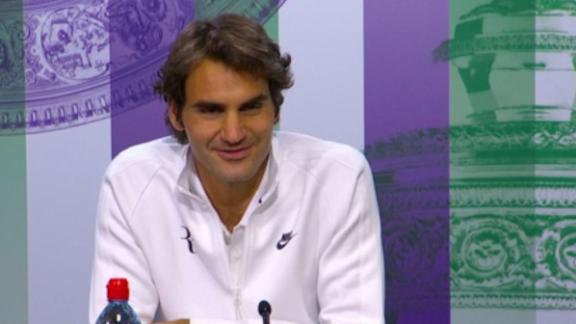 LONDON -- Roger Federer or Rafael Nadal -- and sometimes both -- appeared in all 10 Wimbledon finals from 2003-12, combining to claim nine of those titles.

Neither made it that far in 2013. Not even close. Federer lost his second match at the All England Club. Nadal exited in the first round, a year after bowing out in the second.

With play at Wimbledon starting Monday, Federer and Nadal are eager to return to the heights they once reached with regularity at the grass-court Grand Slam tournament. They sound certain that they are prepared to fare better than 12 months ago -- and, as might be expected from a seven-time champion, Federer came right out and called himself "a contender."

"I feel like, yeah, if things click here, I should be able to win the tournament," Federer said Saturday.

"I feel I have a very good chance again this year. I hope to utilize my fitness, the amount of matches I've played this year," he added. "So I'm really coming in with a much better feeling."

Federer tuned up for Wimbledon, where he is seeded fourth, by winning a title on grass at Halle, Germany, last weekend. That showing gave Federer all the assurance he needed that his game is in prime form at the moment, especially on the slick surface he dominated for a decade.

Last season, Federer explained, there were "certain things I wanted to do, but I couldn't figure out or couldn't do it."

"This year," he continued, "I feel all the options are there. Return, serve, serve and volley, come in, my backhand -- everything is working to my liking. For that reason, I feel I'm a bit more relaxed mentally, because I know it is there. I clearly want to do better than last year, there's no doubt about it."

So does the second-seeded Nadal, of course. He reached five Wimbledon finals and earned a pair of trophies, including by edging Federer 9-7 in the fifth set in 2008. They met in three consecutive title matches at the All England Club from 2006-08, and could meet in the semifinals this year.

First things first, though. Nadal has a test in the first round against big-hitting Martin Klizan, then could face Lukas Rosol, the man who stunned the Spaniard in 2012's second round. The third round could bring a challenge from tough server Ivo Karlovic.

For now, Nadal is most pleased with the state of his left knee, which acted up during his 7-6 (4), 7-6 (8), 6-4 loss in 2013 to 135th-ranked Steve Darcis, saying it "hurts less this year than last year." That's allowed Nadal to put in longer hours than usual on the practice courts this week, a key as the nine-time French Open champion transitions from clay to grass, on which he has lost three matches in a row.

Somber that day, at least Federer can joke about it now.

He said that when he ran into Stakhovsky on Friday, they kidded around about how they could only meet in the final this year, because they were drawn into opposite sides of the bracket.

"So it's all good for both of us," Federer said, then paused before delivering the punch line: "For me, at least."