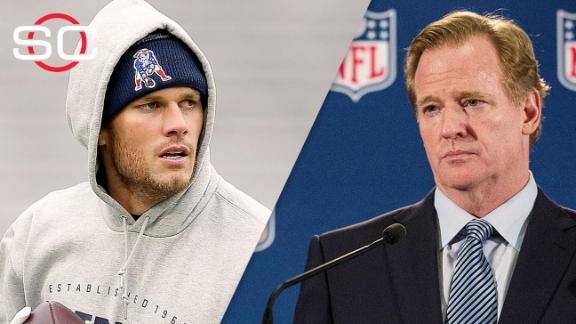 "The decision that Robert made was his decision. I admire and respect Robert. We've had plenty of discussions over the last couple of weeks, and this was his initiative and something he wanted to do," Goodell said Wednesday at the conclusion of the league's spring meeting. "I certainly admire the step he took. We may disagree on things but that's not unusual. It happens."

Goodell sidestepped a question on whether he would remove himself as arbitrator of Brady's appeal, as the NFL Players Association has formally requested, but at the same time said he looked forward to hearing from Brady directly. Goodell said he was unaware of a date being scheduled for the appeal.

"Obviously when we get back [to the league office] tomorrow, we will focus on that and give it full due consideration and make sure that we do the appropriate thing," he said, adding that he wouldn't get into hypothetical situations on Brady's appeal, referring to a "long established" process in which the commissioner has the authority to hear appeals as part of his responsibility for protecting the integrity of the game.

"Any time anyone is suspended from a game they love it's difficult. So any player/coach that we're involved with suspending, that decision comes after a great deal of thought and consideration and recognizing that's a difficult decision. We're very careful with it and we're very thoughtful with it. I have great admiration and respect for Tom Brady, but the rules have to be enforced on a uniform basis and they apply to everybody in the league -- every club, every individual coach, every individual player. We put the game ahead of everyone."

Asked what he would have to hear from Brady to possibly reduce the suspension, Goodell said, "The key for us is to allow any information that Tom Brady and his representatives have ... is there any new information that he can bring more clarity to or something that wasn't considered in the Wells report? That's the reason for the process and why we continue to have an open mind and we're going to do everything possible to understand all the facts."

League officials at the meeting did not discuss protocol of how footballs are handled before games, according to Goodell, as that discussion will take place after the league office explores potential changes based on the findings of the Wells report.

"I do anticipate changes will take place before the 2015 season," he said.

Asked if the NFL had requested that the Patriots suspend officials locker room attendant Jim McNally and equipment assistant John Jastremski, which the club did May 6 when the Wells report was released, Goodell said that wasn't the case.

As for the NFL's handling of the investigation into the Patriots' footballs, which has been a point of contention for the Patriots, Goodell said he asked attorney Ted Wells to determine what the NFL could have done differently and felt Wells "made his views very clear in the report." Wells disagreed with the Patriots' viewpoint that the NFL's investigation was more of a sting operation.

Specific to not correcting an incorrect media leak that 11 of the Patriots' 12 footballs were at least 2 psi under the allowed lower limit, which upset the Patriots because it created a perception they were already guilty before the investigation was complete, Goodell said, "We'd given all that to Ted and Ted had the opportunity to evaluate that."

Wells didn't address the media leaks specifically in his report.

Goodell also said Mexico and Germany have reached out about hosting a future regular-season game, and there is "renewed interest" among the owners. The league is intent on expanding its international series, and it will have three games in London this season for the second straight year.

Arizona hosted San Francisco in Mexico City in 2005, drawing a record crowd of 103,467 for a regular-season game. There have been five preseason matches played in Germany, none since 1994.

The commissioner cites the "passion for our game and taking it to another level" for the league pursuing more international matches.