Ryan Zimmerman to start in LF 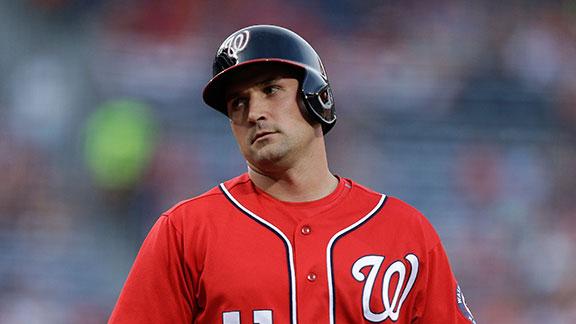 Ryan Zimmerman, who missed 44 games with a fractured right thumb, was activated off the disabled list by the Washington Nationals and will make his first major league start in left field Tuesday night.

Zimmerman, a third baseman whose rehab assignment included his pro debut in the outfield, was on the DL since April 13. He suffered the thumb injury while diving into second base during a pickoff attempt.

He had a .364 batting average with two home runs and six RBIs in his 10 games with the Nats this season.

To make room on the roster, the Nationals optioned Tyler Moore to Triple-A Syracuse.

Zimmerman played three games in left field at Class-A Potomac and was 5-for-14 at the plate during his rehab stint there.

The Nationals had several reasons to experiment with Zimmerman in left field as he was having throwing problems at third base before his latest injury.

The Nats also have had issues getting production from the left field position as primary fill-in Nate McLouth is hitting only .180 this season. Bryce Harper, the regular starter at that position, is out until mid-July following thumb surgery.