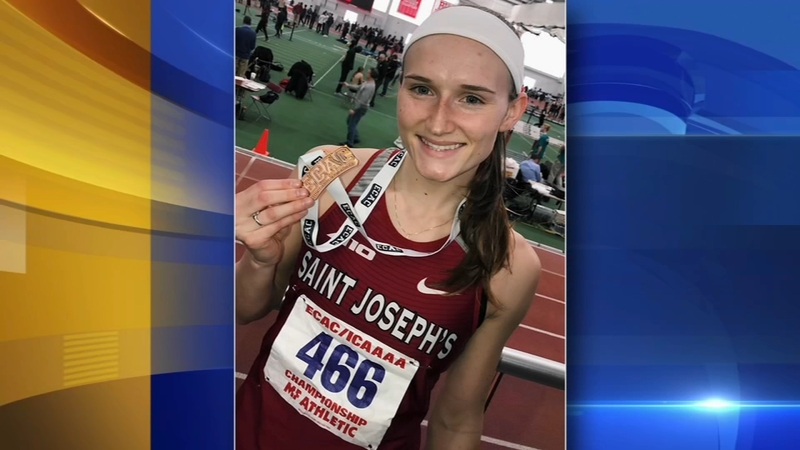 LOWER MERION TWP., Pennsylvania (WPVI) -- These long, crazy days and all the cancellations and all the isolation are enough to bring the strongest of us to dark places. But for those who suffer from anxiety, they're even more difficult to navigate.

Caroline Duffy is a senior track star at St. Joseph's University. A 3-time medalist at the A10 Championships who holds multiple Hawks records, Duffy's stellar career, was almost interrupted.

"When I was a sophomore my anxiety got the best of me and I was considering leaving campus," she tells Action News.

Duffy was diagnosed with an anxiety disorder her sophomore year. It's something she realized she had been struggling with for much of her young life.

She figured she wasn't the only one. So, at the start of her senior year, she decided to start Hawks-Minded, a mental health peer support group for student-athletes on campus.

The group is needed now more than ever. Her senior season, and that of so many of her peers, has been put on hold.

"I was pretty upset, heartbroken...its one of those things where sacrificing the experiences of a few for the health of many, I think that's perfectly OK and what we should be doing. While I'm struggling and trying to come to terms with the loss of a career, there are people losing family members so in the grand scheme of things it's difficult but in the end, it'll be OK," she said.

Duffy decided to forgo her extra year of eligibility. The double major in food marketing and analytics has accepted a job as a sales rep next year for Kellog.

She said the whole experience has been the ultimate test of strength.