Serena in first Slam quarters of '14 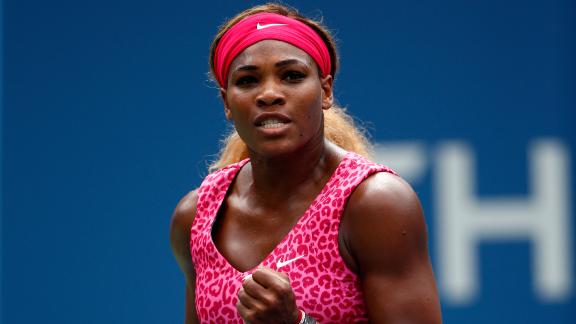 NEW YORK -- Serena Williams reached her first Grand Slam quarterfinal of the year with a 6-3, 6-3 victory over Kaia Kanepi in the US Open on Monday, keeping her hopes alive for a third straight Flushing Meadows crown.

The top-seeded Williams, who lost in the fourth round of the Australian Open, the second round of the French Open and third round of Wimbledon, said she felt the pressure of getting to the quarters in New York.

"I finally made a quarterfinal this year!" Williams said in her on-court interview, raising her hands to the cheers of the crowd in Arthur Ashe Stadium. "I think I felt it in my service game. I'm like, 'Can I please make it to a Grand Slam quarters this year?' "

That drive to do it this year was bad news for the 50th-ranked Kanepi. Williams won 12 straight points on her serve to start the match, a streak that included five of her eight aces.

Pennetta, who reached the semifinals of the US Open last year, said she needed to do her best with the tools she has to have a chance against the No. 1-ranked Williams, who already holds 17 Grand Slam titles.

"You cannot invent something. I mean, you just have to play your tennis," Pennetta said. "Of course, she's better than me, but if I still believe I can beat her, maybe if she doesn't have a good day, I can do that."

Unlike the men's side, which entered Monday with only one major upset, No. 4 David Ferrer, the women's draw has been decimated. Only Williams and No. 10 Caroline Wozniacki have survived among the top 10 seeds going into the tournament's second week.

Wilting in high heat and humidity, Eugenie Bouchard became the latest top woman to lose, ending her streak of making the semifinals at each Grand Slam tournament this year.

The No. 7-seeded Bouchard, the runner-up at Wimbledon in July, needed a medical timeout and was beaten 7-6 (2), 6-4 Monday by 17th-seeded Ekaterina Makarova of Russia.

In muggy air and with temperature in the high 80s (above 30 Celsius), a trainer checked Bouchard's blood pressure and rubbed plastic bags of ice on her shoulders, arms and legs during the changeover after the second set's fifth game.

When action resumed, Bouchard got broken right away to trail 4-2. She broke Makarova and pulled even, but got broken at love in the final game to end it.

"I definitely felt a lot of outside expectations and pressure to win matches. I felt more like it's normal if I win and it's a bit more of a disaster when I lose," Bouchard said. "But that's something that I need to block out."

Two-time US Open runner-up Victoria Azarenka returned to the quarterfinals by ending the surprising run of Serbian qualifier Aleksandra Krunic.

Krunic was trying to become the first qualifier since 1981 to reach the quarterfinals at Flushing Meadows, having already beaten Wimbledon champion Petra Kvitova in the third round and No. 27 Madison Keys in the second.

Krunic gave Azarenka fits with her varied game, filled with drop shots and rushes to the net.

But Azarenka's experience helped down the stretch. She owns two Australian Open titles and lost to Williams in the US Open final the past two years.

In early action Monday, the darling of the US Open, 15-year-old CiCi Bellis, opened her pursuit of the junior girls' crown with a 6-1, 6-3 victory over Mexico's Renata Zarazua.

Bellis, the top-seeded junior, played in the grandstand, the third-largest venue, to accommodate fans eager to watch the 15-year-old prodigy. Bellis upset 12th-seeded Dominika Cibulkova, the Australian Open runner-up, in the first round of the main draw.