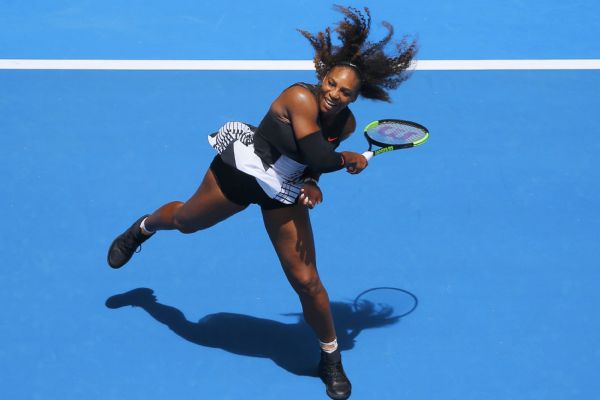 Bencic, a hard-hitting, 19-year-old Swiss, has been touted as one of the game's future stars. In the 2015 Rogers Cup, she beat Williams to reach the final.

But any thoughts of another upset were quickly wiped away by the No. 2 Williams, who Tuesday in the opening round of the season's first major, rolled to a 6-4, 6-3 win.

The turning point came at 4-4 in the opening set, when Williams scrambled wide and delivered an impossible running backhand-slice winner, giving her all the momentum she needed to close the frame and eventually the match.

Williams, 35, hit eight aces and converted 61 percent of her first serves in a tidy 1 hour, 19 minutes. But it wasn't perfect. Williams also hit 30 unforced errors, nearly twice as many as Bencic.

"It was one of the toughest first-round matches I have played," Williams said.

Williams, a 22-time Grand Slam winner, entered the first major of the season with an air of uncertainty. After falling short in the 2016 US Open semifinals, Williams withdrew from the rest of the season -- for the second straight year. She didn't play a tour-level match for more than three months but returned to tour in Auckland to open up her 2017 campaign. There, she fell in her second-round match against fellow American Madison Brengle.

Williams, who committed an astronomical 88 unforced errors in that match, blamed what she described as abhorrent conditions for why she couldn't settle into a rhythm.

Wind was not a factor Tuesday in Melbourne, and neither was the sweltering 93-degree heat inside the park. Williams improved to 65-1 all time in opening-round Grand Slam matches.

A six-time champion Down Under, Williams is hoping to avenge a loss in last year's final to Angelique Kerber. Williams eventually lost her No. 1 ranking to the German and, for the first time since the 2013 Australian Open, entered a major event without the top seed in hand.

Another title in Melbourne would give Williams her 10th Grand Slam championship since turning 30 years old and break a tie with Steffi Graf as the Open era leader in major wins. Both have 22.

Next up for Williams is Czech and former French Open runner-up Lucie Safarova, who remarkably saved nine match points in a 3-6, 7-6 (7), 6-1 win over Yanina Wickmayer.