Sloane Stephens loses in first round 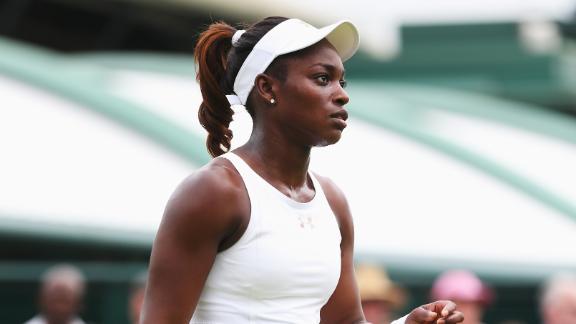 The 18th-seeded American's run of reaching the second week at six consecutive majors -- the longest active such streak among women -- ended abruptly Monday at Wimbledon with a 6-2, 7-6 (6) first-round loss to 109th-ranked Maria Kirilenko of Russia.

"It feels like the end of the world now, but fortunately it's not," Stephens said, shaking her head. "So that's a good thing. You've just got to go back and keep working."

She saved five match points while serving and trailing 6-5 in the second set. But in the tiebreaker, a wide forehand from Stephens allowed Kirilenko to convert her sixth match point.

In a late match, American Coco Vandeweghe continued her strong recent play on grass by reaching the second round with a victory over the Spanish player who upset Serena Williams at the French Open.

Vandeweghe, who had lost in the first round on her three previous appearances at Wimbledon, defeated Garbine Muguruza 6-3, 3-6, 7-5.

The 20-year-old Muguruza, the No. 27 seed at Wimbledon, made an impression in Paris where she beat Williams in straight sets before reaching the quarterfinals.

Vandeweghe, a 22-year-old Californian, won her first WTA tournament last week on grass in the Netherlands as a qualifier. She improved to a career-best 51st in rankings released Monday.

So it's become something of a theme when it comes to the 21-year-old, who is based in Florida. Since a semifinal showing at the 2013 Australian Open, Stephens had made it to at least the fourth round at every major. Last year at Wimbledon, she got to the quarterfinals before losing to eventual champion Marion Bartoli.

When a reporter began a question about the end of her second-week Slam success, Stephens interjected: "The streak is broken. I'm so sorry to all of you who don't have to write about me this week and next week. I'm so sorry."

Said Kirilenko: "I didn't really think about the results she had before."

Kirilenko's ranking is rather misleading. She has been ranked in the top 10, and played in the quarterfinals at the All England Club two years ago.

But she has been troubled by injuries that limited her to only five matches in 2014 ahead of Wimbledon, including to her left knee. A more recent left wrist problem resulted in the Russian hitting only slices on the backhand side until about a week ago.

"I haven't played such a long match in a long time," Kirilenko said about Monday's victory. "I didn't play for a long time, but the game is there. I didn't lose my game. I just need some more matches and to go through difficult moments when you get tired. So today was a big plus for me."

The loss continued the Australian's poor run at Wimbledon, where she has never advanced past the third round and where she has lost in the first round six times in her 12 appearances at the All England Club.

Stosur, seeded 17th, recently split with coach Miles Maclagan just seven months into their partnership. The 2011 US Open champion hasn't reached the semifinals in any tournament since Hobart in January and in recent weeks lost on grass in the second round at Birmingham and the first round at Eastbourne.

Stosur said she won't be in a hurry to hire a new coach.

"By no means a rush. ... I want to really take my time and think about it and make sure I'm doing the right thing," Stosur said.

"There's probably a handful of coaches that you might want to think about. They've probably all got jobs."

Able to escape the first round was former No. 1 Victoria Azarenka, who won her first match in five months on Monday, defeating Mirjana Lucic-Baroni 6-3, 7-5.

The eighth-seeded Azarenka, a two-time semifinalist at the All England Club, made her return at Eastbourne last week following a long layoff with a left foot injury. She lost in the first round at the Wimbledon warm-up event.

Azarenka fought hard to get past the 1999 Wimbledon semifinalist, winning on her fifth match point. Azarenka struggled with her serve and had eight double faults but made the most of her opponent's 29 unforced errors.

"Well, I'm just very happy to be able to play. This is what I love to do. The best feeling is to play pain-free," Azarenka said. "That's what's important for me. Getting the game together and the timing, it's all a long process."

Winning at the All England Club has been rare recently for five-time champion Venus Williams, who put that aside Monday and won her first singles match at Wimbledon since 2011 with a 6-4, 4-6, 6-2 victory over Maria-Teresa Torro-Flor of Spain.

The former World No. 1 lost in the first round in 2012 and missed last year's tournament because of a back injury.

The 30th-seeded Williams had a slow start and had to battle in the 1-hour, 46-minute match against a player ranked 56th making only her second appearance at Wimbledon. Williams still managed to hit 41 winners, including 11 aces.

In other results, second-seeded Li Na of China beat Paula Kania of Poland 7-5, 6-2.

Li, the 2011 French Open champion, rallied to win the last four games of the first set after being down a service break at 5-3.

Kania fought off two match points and broke Li's serve at 5-1 but Li closed out the match in the following game.

The 43-year-old Date-Krumm, who reached the semifinals at Wimbledon 18 years ago, was the oldest player entered in the tournament this year. She made her Wimbledon debut in 1989, a year after Makarova was born.

Date-Krumm made 47 unforced errors in the 2-hour, 24-minute match.

Li was the highest-seeded woman in action on the first day of the tournament. Top-seeded Serena Williams is scheduled to play Tuesday.

Stephens Bounced In First Round
Maria Kirilenko upset 18th-seeded Sloane Stephens in the first round of Wimbledon.

Sloane: There Was Nothing I Could Do
Sloane Stephens talks to reporters after her surprising first-round loss to Maria Kirilenko.

Never Enough Wimbledon Titles For Venus
Pam Shriver talks to Venus Williams, who beat Maria-Teresa Torro-Flor to advance to the second round, about how it feels to be back at Wimbledon.

Venus Into Second Round At Wimbledon
Patrick McEnroe and Chris Evert examine how well Venus Williams was moving in her win over Maria-Teresa Torro-Flor and how they expect Williams to perform in the second round.