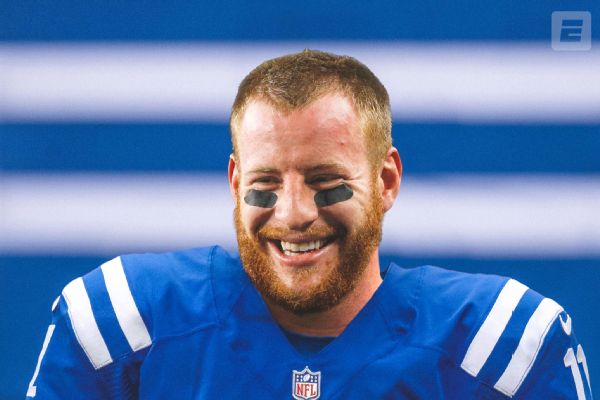 The Philadelphia Eagles have agreed to trade quarterback Carson Wentz to the Indianapolis Colts for a 2021 third-round draft pick and a conditional 2022 second-round pick that could turn into a first-rounder, league sources told ESPN.


The pick also could become a first-rounder if Wentz plays at least 70% of the snaps and the Colts reach the playoffs. But the worst the 2022 pick can be is a second-rounder, meaning the Eagles are assured of netting two value picks for Wentz.

The Eagles and Colts spent much of the past two weeks trying to finalize the trade, which cannot be officially processed until the new NFL year begins March 17. Despite being speculated as a potential suitor for Wentz in trade talks, the Chicago Bears did not wind up making an offer to the Eagles, according to a source.

The Eagles will take a $33.8 million dead-cap hit -- the largest dead-cap hit that any team ever has taken for a player -- while the Colts will assume the balance of Wentz's $128 million extension, including the $10 million guaranteed roster bonus due March 19.

Each team walks away from the deal with what it wanted across all fronts: Wentz will be reunited with Colts head coach Frank Reich, his former offensive coordinator in Philadelphia, and help fill the void left by Philip Rivers' retirement, while the Eagles are likely to turn to Jalen Hurts, though they also intend to bring in competition for him. The Eagles' starting job is not expected to automatically go to Hurts.

Trading Wentz marks the end of an unexpected chapter and year with the Eagles. Wentz went from a former MVP candidate to backing up Hurts -- a rookie second-round pick in 2020 -- while his relationship with former Eagles head coach Doug Pederson disintegrated.

Wentz wanted out of Philadelphia even though the Eagles hired former Colts offensive coordinator Nick Sirianni as their new head coach.

Reich, who has been Indianapolis' head coach the past three years, was Philadelphia's offensive coordinator for Wentz's first two NFL seasons in 2016 and 2017. With Reich at the helm, Wentz will take the reins of a Colts attack that ranked 10th in the NFL in total offense and ninth in scoring last season.


Four-time Pro Bowl receiver T.Y. Hilton is an unrestricted free agent, and his future with the Colts is uncertain, but Indianapolis will enter free agency and the 2021 draft with a diverse offense featuring running back Jonathan Taylor, who was the NFL's third-leading rusher as a rookie with 1,169 yards last season.

The Eagles signed Wentz to a four-year, $128 million extension in June 2019, signaling their belief that he was the long-term answer at quarterback.

But the relationship soured during a rocky 2020 season during which Wentz ranked 34th in the NFL in completion percentage (57.4%) and first in interceptions (15) and sacks (50) despite being benched in favor of Hurts for Philadelphia's final four games.

Wentz, 28, appeared to be on a trajectory toward stardom in Philadelphia after throwing 33 touchdowns and just seven interceptions in 2017 while making a hard charge for the MVP before tearing multiple knee ligaments that December. He developed a stress fracture in his back the following season but managed to toss 48 touchdowns to 14 interceptions over the next two years.


But the rift grew between Wentz and Pederson; a source told ESPN's Tim McManus that Pederson stripped Wentz of much of his control over the offense as injuries and losses piled up in 2020, and Wentz's faith in Pederson's system was lost.

Pederson was fired last month on the heels of a 4-11-1 season after he and owner Jeffrey Lurie failed to agree on a common vision for the future. But the Sirianni hiring did not change Wentz's mind about wanting to move on from Philadelphia, a sign that there were trust issues that extended beyond Pederson.

The Eagles traded up twice in the draft to select Wentz out of North Dakota State, and Wentz validated that decision early on. He owns the franchise single-season record for completions (388), completion percentage (69.6), passing yards (4,039), and passing TDs (33).

Wentz also is one of only six quarterbacks in NFL history to record 20-plus passing TDs and 10 or fewer interceptions in three straight seasons, joining Tom Brady, Drew Brees, Peyton Manning, Aaron Rodgers and Russell Wilson. He was named first-team All-Pro and made his lone Pro Bowl appearance in 2017. 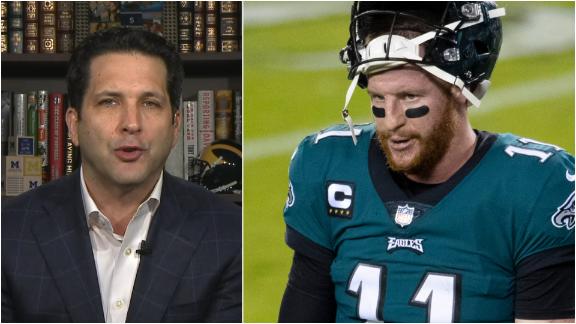 How did the Eagles, Colts come to an agreement on trading Wentz?
Adam Schefter breaks down the details of the Philadelphia Eagles trading Carson Wentz to the Indianapolis Colts. 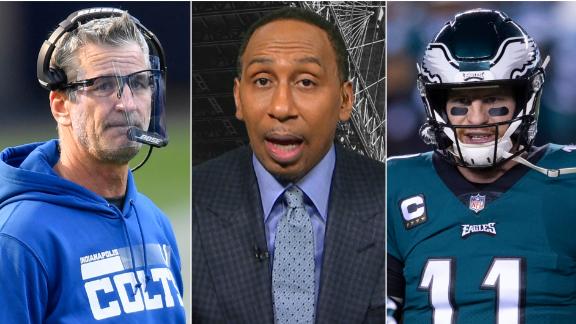