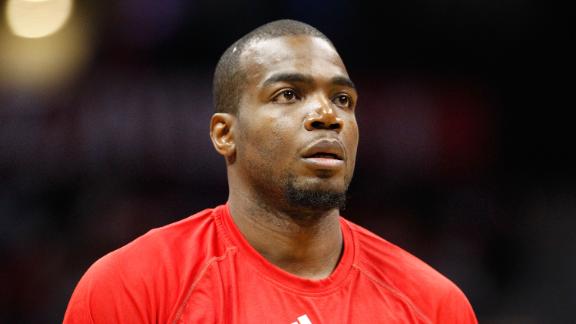 In the wake of multiple withdrawals of frontcourt candidates for the national team, USA Basketball has invited Atlanta Hawks forward Paul Millsap to its training camp this week in Las Vegas, it was announced Sunday.

After initially planning to make no roster additions after the withdrawals of Kevin Love, Blake Griffin and LaMarcus Aldridge, USAB officials decided to bring Millsap in as a potential floor-spacer with the ability to play multiple positions internationally.

"Paul has prior experience at the National Team level having participated in the 2009 National Team mini-camp and offers us veteran inside player who possesses attributes that can be beneficial for us," said chairman Jerry Colangelo in a release.

After a successful first season with the Hawks, Millsap will join the likes of DeMarcus Cousins, Andre Drummond and Kenneth Faried in trying to capitalize on the high-profile absentees to claim a spot on the final 12-man roster that will represent the United States at the inaugural FIBA Basketball World Cup in Spain starting Aug. 30.

"I'm very excited about being added to the USA Men's National Team roster," Millsap said. "I look forward to practicing with and competing against some of the NBA's best for the honor of representing our country in Spain."

USA Basketball announced Love's withdrawal Saturday, citing "his current status" in a reference to the trade limbo Love is in at the moment with the Minnesota Timberwolves.

Millsap will join Chandler Parsons, Gordon Hayward and Hawks teammate Kyle Korver in a group of versatile swingmen with long-distance shooting ability trying to play their way onto the final roster.

In a phone interview Saturday, Colangelo told ESPN.com that he anticipated making no further additions to the roster and would likely choose the 12-man roster for the World Cup -- in conjunction with Krzyzewski -- from the senior players who will be in camp in Las Vegas next week as well as the younger members from the 13-man Select squad that will scrimmage with the veterans.

"You can't just sit around and cry in your beer regarding who you don't have," Colangelo said. "You look at what you do have, and you say, 'We're going to get the job done.' We feel very confident about our opportunity. We're ready for it."

Regarding Love, who initially committed to play in Spain last summer in a joint announcement in July 2013 with Durant, Colangelo said: "He really wanted to play. He was truly remorseful about it. But the circumstances just don't allow it."

Only the winner of the 24-team FIBA World Cup will automatically qualify for the 2016 Olympics in Brazil. Even a second-place finish would force Team USA to participate in Olympic qualifying next summer.