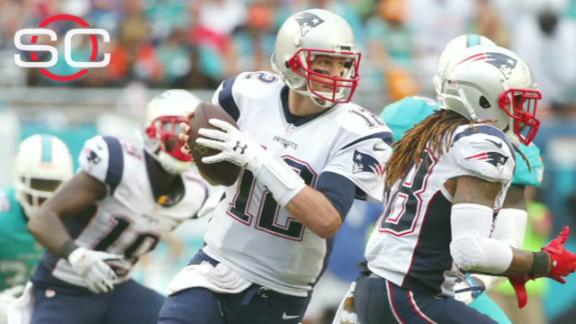 New England Patriots quarterback Tom Bradyhas a sprained right ankle and is expected to be ready for the team's divisional round playoff game in two weeks, a source told ESPN NFL Insider Adam Schefter on Monday.

Brady, who had an MRI on Monday morning, was limping noticeably and said he was "pretty sore" after the team's season-ending 20-10 loss to the Miami Dolphinson Sunday. He took a big hit from Dolphins defensive lineman Ndamukong Suh early in the second quarter.

The MRI didn't reveal any breaks or fractures, the source told Schefter.

"I've had plenty worse injuries than this one," Brady said during his weekly appearance on sports radio WEEI on Monday morning."Suh is a big guy and he just came down on the back of me. Obviously, however big he is -- 300 pounds -- and he just kind of collapses on the back of your legs, there is going to be some residual damage to that. It's part of football.

"I'll just work hard to get the right treatment. I've always dealt with injuries. I'm very confident I know how to deal with injuries. Believe me, I'll be doing everything I can to be out there. There is nothing else in my life that's a priority at this point other than getting to feel like I'm 100 percent."

Brady required medical attention on the sideline after the hit, with the athletic training staff and medical staff re-taping his right ankle. The injury did not keep him out of the game, although the Patriots replaced him with backupJimmy Garoppoloon their final drive with 1 minute, 56 seconds remaining when they weretrailing 20-10.

"I'll just say I'm glad we have a week off. It obviously helps," Brady told WEEI. "I wanted to stay in there and play yesterday and see if I could do some stuff to help our team. ...

"I'm doing all right. We'll see how it goes this week."

The Patriots have a first-round playoff bye before hosting a divisional-round game.

Patriots fall to Dolphins
New England's offense is limited to 196 yards while Miami's DeVante Parker makes five catches for 106 yards and a score in a 20-10 win for the Dolphins.