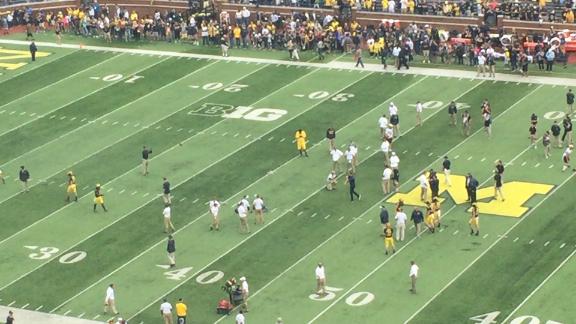 ANN ARBOR, Mich. -- Though he wasn't in a New England Patriots uniform, Tom Brady found a way to throw some touchdown passes this weekend.

Brady and Michigancoach Jim Harbaugh played catch together Saturday afternoon as the fourth-ranked Wolverines warmed up around the two former Wolverines quarterbacks. Brady was visiting his alma mater this weekend as Michigan's honorary captain for its afternoon matchup with Colorado.

Brady arrived in Ann Arbor on Friday night to speak to the team, but before he met the Wolverines at the hotel, he and his son made a stop at Michigan Stadium to throw a few passes.

The QB returned to the stadium around 2 p.m. Saturday afternoon and headed into the Michigan locker room shortly after the team arrived. Harbaugh and Brady lined up about 25 yards from each other and had a spirited game of catch. Harbaugh, true to form, wore cleats and a pair of receiver gloves.

After the Wolverines' 45-28 victory, Harbaugh called the exchange "a thrill."

"When I look back on my career of playing catch with different people, that was right there with my dad, playing catch with my dad," he said. "His pregame talk was outstanding. It was very good, very from the heart. He went through each position and he told them what they were expected to play like ... the guys who wore those uniforms and played that position before."

Harbaugh noted that he initiated the catch.

"Of course," he said. "'Let's play a little catch, Tom.' He throws a good ball. That ball almost catches itself the way he throws it."

Brady hasn't been back to a game at Michigan since he played his final game in a maize and blue uniform in 1999. His four-week suspension stemming from the Deflategate punishment opened up his calendar this September, and Harbaugh invited him to spend some of that time with the Michigan team.

At least a handful of fans traded in their Michigan colors for Patriots jerseys to welcome one of the school's most successful NFL exports of all time.

As part of his duties as honorary captain, Brady gave the team a pregame speech Friday night in its hotel and participated in the coin toss minutes before kickoff. Before Brady joined the team's three captains at midfield, Michigan played a video montage of his highlights while he was a Wolverine.

Brady was joined during the coin toss by billionaire video game developer Bobby Kotick and Bill McCartney, a Michigan native and former Wolverine assistant who won a national championship as head coach at Colorado.

Brady couldn't bring his Wolverines any luck prior to kickoff, though. The Buffaloes won the coin toss before losing the game.