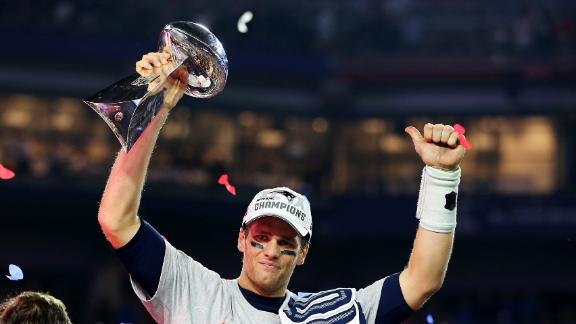 On the same University of Phoenix field seven years ago, Brady had watched in agony as New York Giants receiver David Tyree made an improbable on-the-helmet catch in crunch time during Super Bowl XLII.

It was the first time Brady, ever the optimist, was shaken.

"I felt like we were going to win the whole game, and then they made that catch. Then I had a little bit of a doubt," Brady acknowledged Monday morning, bringing his thumb and index finger together to make his point.

"Then we made a great play. We've been on the other end of some great catches and not being able to finish it out. This time we made the play."

The play, of course, was an interception by undrafted cornerback Malcolm Butler.

"He's been doing it to me in practice all season," Brady said, "so it was actually nice to see him pick somebody else off."

A sleep-deprived but still-elated Brady was officially awarded his MVP trophy on Monday morning. The 10-year gap between championships for Brady eclipsed Roger Staubach's six-year gap as the longest in NFL history for a starting quarterback.

The long wait has led to a greater appreciation of his fourth Super Bowl championship in six tries.

"I was a young kid when we won those first three. I know in '04, after we beat the Eagles, I was like, 'I'm ready for this to be over and the offseason to start' because we have experienced it," he said. "Obviously with some perspective that I've gained, it's a hard thing to get here and it's a hard thing to win the game."

Brady, who will be 38 years old by the time the 2015 season kicks off, laughed when asked how much longer he hopes to play.

"I love doing it, so I don't want it to end any time soon," he said. "A lot of decisions I make in my life are how to sustain it. That takes a commitment in and of itself. You have to put it in the bank, as Coach always says, so it's there when you need it."