Tom Brady on ankle: 'Sore, but it will be all right' 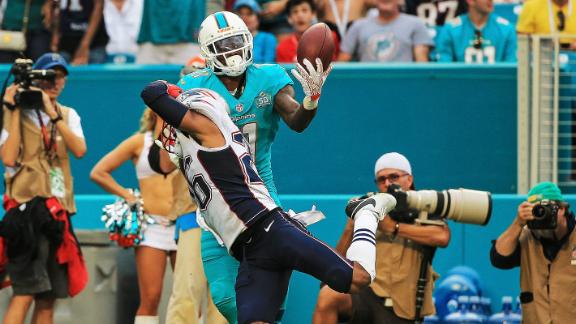 "I'm pretty sore," Brady acknowledged after the game, "but it will be all right."

Brady required medical attention on the sideline after the hit, with the athletic training staff and medical staff re-taping his right ankle. He didn't miss any time during the game, but the Patriots replaced him with backup Jimmy Garoppolo on their final drive with 1 minute, 56 seconds remaining when they were trailing 20-10.

Teammates expressed confidence that Brady would find a way to be at his best in the divisional round of the playoffs while working through the ankle injury.

"You never want to see 12 get hit, or 12 have an injury, he's so important to our football team," said special teams captain Matthew Slater. "I don't know his status ... but that guy's tough as nails. If there is one thing I know about him after playing with him eight years, not to many dudes tougher than him."

"We have some of the best trainers on this team, he has his own [rehabilitation] facility [at the stadium], he'll be back," added receiver Brandon LaFell.

The Patriots have a first-round playoff bye before hosting a divisional-round game.

Patriots fall to Dolphins
New England's offense is limited to 196 yards while Miami's DeVante Parker makes five catches for 106 yards and a score in a 20-10 win for the Dolphins.