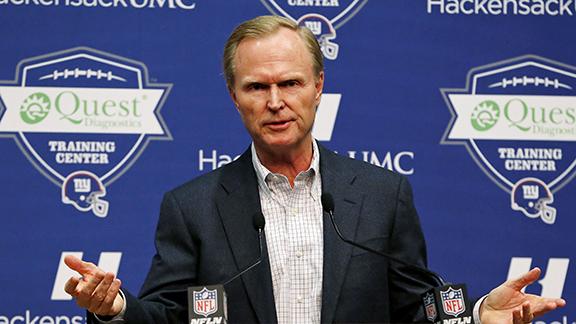 But after the team went 7-9 last year and 6-10 this season, Mara made it clear that he expects to see improvement in 2015.

"Tom knows his legacy is on the line," Mara said in a long news conference Tuesday. "He doesn't want to have three losing seasons in a row."

Asked whether 2015 could be described as a win-or-else year for people in the Giants organization, Mara replied: "I don't think that's an unfair statement."

Mara's comments don't sound too different from those he issued a year ago. He called the 6-10 record "an embarrassment," said the defense had to improve (Last year he said the "offense is broken"), lamented the team's league-leading number of injuries and said that, in spite of it all, he and co-owner Steve Tisch are convinced that Coughlin and general manager Jerry Reese are the right men for their jobs.

But the simple math of the situation indicates that a third straight losing season could add consequence to Mara's words of warning this time around.

For example, it was pointed out to Mara that the Giants have historically not allowed coaches to work lame-duck seasons without extending their contracts at least one year. Coughlin is signed through only 2015. And while Mara said he hadn't broached that topic with his coach, he indicated the team could change its long-held policy against one-year deals for coaches.

"I'm not so sure that we'll be in that situation anymore," Mara said. "I will have to talk with him about that."

For his part, that possibility seems not to affect Coughlin. He invoked the well-known name of a former Brooklyn Dodgers manager who famously worked on 23 one-year deals throughout his entire career.

Coughlin was fired up in his own news conference Tuesday, and he supported Mara's assertion that he's concerned about his coaching legacy.

"My legacy? Year to year, how I'm viewed as a coach? Yeah, that bugs me," the two-time Super Bowl-winning Giants coach said. "I don't want to be associated with losing."

Coughlin said he was in the process of evaluating his coaching staff and hasn't ruled out making changes, even at the coordinator level.

But he offered a spirited defense of defensive coordinator Perry Fewell, pointing out that the Giants finished in the top 10 in four key defensive categories -- third-down defense, turnovers, red zone defense and sacks. He said he's well aware that the Giants finished 29th in total team defense and didn't perform well in key situations, but he seemed determined to make sure that the perception of the job Fewell did wasn't exclusively negative.

"I'm trying to introduce balance, that's all," Coughlin said. "If you're only going to look at the bad, I mean, I see it, too. How about the first four plays Sunday? What happened there?"

Coughlin said the thing he looks for when deciding whether to replace a coach is whether that coach's message is being prepared, delivered and received effectively, and that he still sees that with Fewell, whom he called "a good coach."

But he also said of his evaluation, "I haven't finished."

With offensive coordinator Ben McAdoo having been here just one year, Fewell and special teams coordinator Tom Quinn are the two high-profile Giants assistants on the firing line. Mara and Reese both said it would be Coughlin's decision whether to retain his coordinators, though they would make their own opinions on the matter known to him before he decides.

"When a coach has been as successful as Tom Coughlin has been in the NFL, he should have the right to pick his own coaches," Reese said, echoing what Mara had said on the same issue earlier.

The takeaway from Mara, however, was that decisions Coughlin makes on this front will go into the ultimate evaluation of his 2015 performance and his future beyond that. Mara said there were times this year when he didn't feel as positive about the future of Coughlin and his coaches as he does now.

"When I was sitting on the bus after the Jacksonville game, I wanted to fire everybody," Mara said.

That was the Giants' seventh loss in a row, and the worst of the bunch considering the opponent's record and the 21-0 lead the Giants had at one point in the game. But they won their next three against Tennessee, Washington and St. Louis before losing the season finale against the Eagles.

While saying, "I'm well aware of who we played," Mara said he believed the team continued to play hard for Coughlin and stuck together behind him. Reese underscored that assessment.

"You can tell quickly if a team doesn't want to play for a coach, and that never happened," Reese said.

How far that can carry Coughlin if the team doesn't improve and make the playoffs in 2015 remains to be seen. Coughlin, 68, said he never considered retiring at the end of this season and deadpanned "maybe 10 or 12 more years" when asked how much longer he'd like to continue coaching.

When he got serious, he said he didn't think about that, because it depends on a number of factors, including his own continued good health and that of his wife, Judy.

Mara said he has thought about the long-term future of the head coach position after Coughlin.

"I know who's out there," Mara said. "I still believe Tom Coughlin gives us the best chance to win."