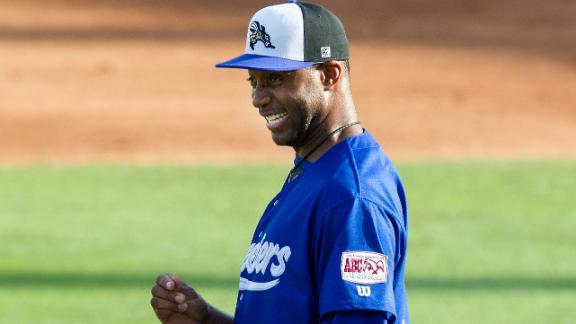 Talk about a memorable Wednesday: Tracy McGrady collected his first professional strikeout and retired from baseball in the same night.

"That is definitely going in the trophy case," he said from the dugout following his outing, according to CBS Houston. "I told some of the guys that I am going to get a strikeout before I stop playing. I got it in the second inning. Thank you Jesus."

McGrady threw 1 1/3 innings in the Atlantic League's All-Star Game on Wednesday, striking out Bryan Pounds to earn his elusive "K." His teammates applauded as he walked off the mound.

In all, the 35-year-old McGrady had a 6.75 ERA in four appearances (6 2/3 innings) with the Sugar Land Skeeters. He allowed four hits and five runs.

"It has been a tremendous ride," McGrady said, according to CBS Houston. "It is my last game today. I informed the team this would be my last outing and I appreciate them giving me this opportunity to start the game and enjoy this great mid-summers classic.

"This has been an awesome year. Not having my basketball career end the way I wanted but having the opportunity to be friends with some of the guys and get to know them and compete with them, learn from them every day, it's been an honor."

McGrady played baseball until his senior year in high school when he transferred to a school without a baseball program. He was a seven-time NBA All-Star and won two scoring titles.

"I got a little emotional coming off the mound," McGrady admitted. "It feels good to be celebrated again."