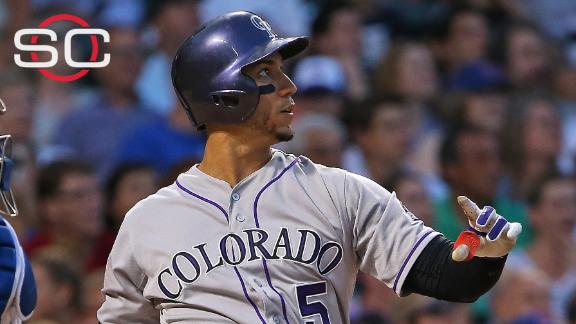 The MLB trade deadline is nearing, and speculation is heating up across baseball. Here is what our writers are hearing today:

Crasnick's take: Carlos Gonzalez's recent torrid streak is generating a lot of trade speculation, but one person familiar with the Rockies' situation thinks they might wait until the winter. "Colorado will want more than I think the market will give," the source said. "Better to trade him in the offseason."

Gonzalez is hitting .455 (15-for-33) with seven homers and 16 RBI since the All-Star break and has a contract that several teams wouldn't mind picking up, provided he's healthy.

Finally, the Rockies are trying to move him in a hurry while a lot of other lefty outfield bats (from Jay Bruce to Gerardo Parra to Will Venable) are on the market. That can't help Colorado GM Jeff Bridich's trade leverage.

Stark's take: Jonathan Papelbon's no-trade clause allows him to veto a deal to the Nationals, so he would want his $13 million vesting option to be guaranteed in order to approve a deal. But the teams still need to agree on how much of Papelbon's salary for this year and next the Phillies would pick up. An even larger issue is Papelbon's repeated assertions that he would not approve any deal to a team where he wouldn't be the full-time closer. So if the Nationals viewed his acquisition as an opportunity for him to share that role with Drew Storen, or hoped he would agree to set up for Storen, that's a problem they need to grapple with on multiple levels.

Stark's take: One AL exec predicted Tuesday that James Shields would wind up getting traded to the Giants. But the Padres have told clubs they don't want to trade within the division.

Shields fits the profile of the type of starting pitcher the Giants are shopping for -- a guy who could slot in behind Madison Bumgarner in their rotation. The Giants also had interest in Shields early in the offseason as a free agent.

But despite the Padres' willingness to make that Matt Kemp-Yasmani Grandal trade last winter, they seem to have changed their minds about making deals with their NL West competition. So NL West teams that have spoken with the Padressay they've shown no interest in trading any of their prominent trade chips within their division.

Jayson Stark -- Dodgers could trade for two starters: The Dodgers are in on a long list of starting pitchers -- and haven't ruled out trading for two this week, if the price is right.

In a glutted starting-pitching market, the Dodgers haven't ruled out the possibility of trading for two starters instead of one. But they have onlyso many prospects they're prepared to deal. So if they have to use too many chips to trade for a Cole Hamels or David Price, two trades for starters are unlikely. But if the Dodgerswind up shopping in the bargain bin and prices come down before the deadline, it's still "possible" they could deal for two, according to one source who spoke with them.

Crasnick's take:The market for starting pitching continues to change and evolve. Detroit is looking to add a starter, rather than trade David Price, and Jeff Samardzija could very well be staying in Chicago since the White Sox are riding a five-game win streak.

That could be good news for the Reds, who are trying to trade Mike Leake, and the Rangers, who will move Yovani Gallardo if they get an offer to their liking.

A baseball source said that Mat Latos' market is also starting to come into "focus,'' and the Marlins are confident they can deal him by the deadline.

Stark's take: The Tigers' stance could change if they completely unravel in their next three games, according to teams that have spoken with Detroit. After their 5-2 loss to the Rays on Monday, they've dropped to 4 games behind in the wild-card race -- and are now 12 games under .500 since their 11-2 start.

But with Miguel Cabrera due back in the next three weeks, the Tigers are now actively shopping to add pitching. Other teams say they've asked about a large number of starters and setup relievers. So this could be a busy week.

Stark's take: A little over three weeks ago, the White Sox had fallen to a season-worst 10 games under .500. But since then they've gone 15-8, and now appear reluctant to break up the rotation that has fueled that run.

So one club that spoke with them reports it was told they would need a return for Samardzija that "substantially" improves their chances to compete next year without sacrificing their ability to compete this year.