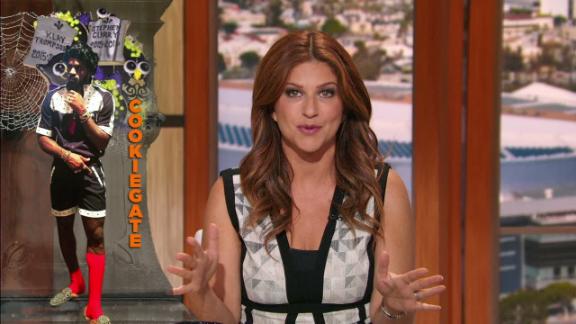 PORTLAND, Ore. -- Certain members of the Golden State Warriors didn't take too kindly to the props LeBron James used at his annual Halloween Party over the weekend.

The part they took exception to was a skeleton James had stationed on a stage with "3-1 Lead" inscribed on the bass drum head, a clear shot at the Warriors squandering a 3-1 series lead in the 2016 NBA Finals.

Last January prior to the Warriors' first visit to Quicken Loans Arena since winning the 2015 title there, Cavaliers players felt Curry was disrespectful in saying he hoped the visiting locker roomstill smelled like champagne.

"I don't think they like that Steph [Curry] said that," Warriors guard Shaun Livingston told ESPN. "... Guys see it and everybody feels their own way about it, but it just fuels everybody for the next time we play them."

Maybe this was James' way of issuing some payback.

"More power to them," he said. "I already got enough fuel. I don't need more. Enjoy."

Klay Thompson, visibly irritated by the subject, sternly told ESPN, "Man, I don't care about that."

Curry simply said, "I'm just going to keep it quiet." He then shook his head and giggled.

Kevin Durant even chimed in, although he wasn't a member of the Warriors last season. However, he knows what it feels like to be up 3-1 only to lose the next three games. He stated he's not about the back-and-forth shots.

Durant said he can empathize with how both teams are feeling about this situation.

"I wasn't here last year but I obviously know from being on the team, you don't want to see nothing like that [from Cavs]," he said. "Me personally, it's just jokes because you still have to play. Just like I'm sure there were so many jokes that went on about Cleveland and LeBron over the years, and you still have to play on the court. So none of that s--- matters until you duke it out on the court.

"I understand why anybody would [be mad] and I understand what LeBron is coming from. If you won a championship for your city and you did it in historic fashion, it's something that you'll never forget. So, no hard feelings. I understand where both sides are coming from, I guess."

These two teams will meet for the first time this season on Christmas Day in Cleveland. There will be no love lost.