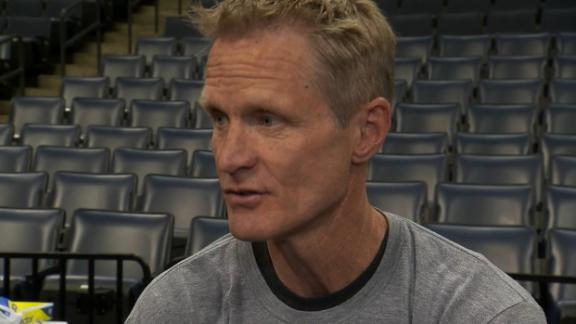 Golden Statecoach Steve Kerr said Saturday the team will monitor players' minutes against theMemphis Grizzlies, saying the Warriors will "try to win" but "not at the expense of wearing out people."

Kerr said center Andrew Bogut will rest Saturday night against the Grizzlies, while the remainder of the players' minutes will be monitored regardless of the score of the game.

"The game is certainly not more important than our health," Kerr said. "Our health is the main thing going into next weekend. We're not going to overrun anyone with minutes, we're probably going to play a lot of people and we're going to try to win the game, but not at the expense of wearing people out. If we do it, it's going to have to be as a team and a lot of people will have to contribute."

"The one thing I won't do is play anybody 38-40 minutes ..." Kerr added. "No matter what happens tonight, we'll keep minutes down for our key guys and I expect everybody to be ready to contribute and play a solid game."

The Warriors (70-9) need to win their final three regular-season games -- two against the Grizzlies and one against the San Antonio Spurs -- to break the Chicago Bulls' all-time record of 72 wins in a single season.

Kerr said Bogut would play Sunday against the Spurs. He said the possibility of resting veteransAndre IguodalaandShaun Livingstonwas discussed, but both players said they wanted to play.

"All those guys want to play," Kerr said. "They like the rhythm ... Rhythm to me is really important, especially for all of our guys and their shooting skill and handling ... You don't want to get away from the game for too long."

After the Warriors clinched the No. 1 seed in the West with their win over the Spurs on Thursday night, Kerr said the team would meet to talk about how to proceed with playing time going into the final regular-season games.

"I'm inclined to give some guys some rest if they need it, but I've sort of made a pact with the guys that if they are not banged up and they are not tired and if they want to go for this record or whatever then -- so we got to talk," Kerr said after the game.

Asked about his concerns, Kerr said, "I'm a little uneasy about it. It's not that I'm worried about injury. You can get injured in practice. It's not so much that I want to rest guys to avoid injury, but we do have a back-to-back here. It will be our third game in four nights."

All-Star forward Draymond Green said Thursday he thinks most of his teammates are aiming for the wins record over rest.

"Think about the year we've had: started 24-0, haven't lost two in a row all year, have had several streaks of seven-plus wins in a row, yet we're still sitting here needing three in a row," Green said. "That tells you how hard this is to do.

"So to get this far and kind of just tank it and say, 'Aw, never mind.' ... Let's face it, we probably will never get to this point again. That's why it's only been done one time. I think most guys in the locker room are all-in, and we'll figure that out this weekend."

"I just told guys, 'Hey, if you need the rest, take the rest, and if you don't, we going after it,'" he said. "I think it can be tough depending on how you want to look at it, and most guys in the locker room are saying we're right here, we put all this effort into it, let's try to go for it."

Information from ESPN's Ethan Sherwood Strauss was used in this report.