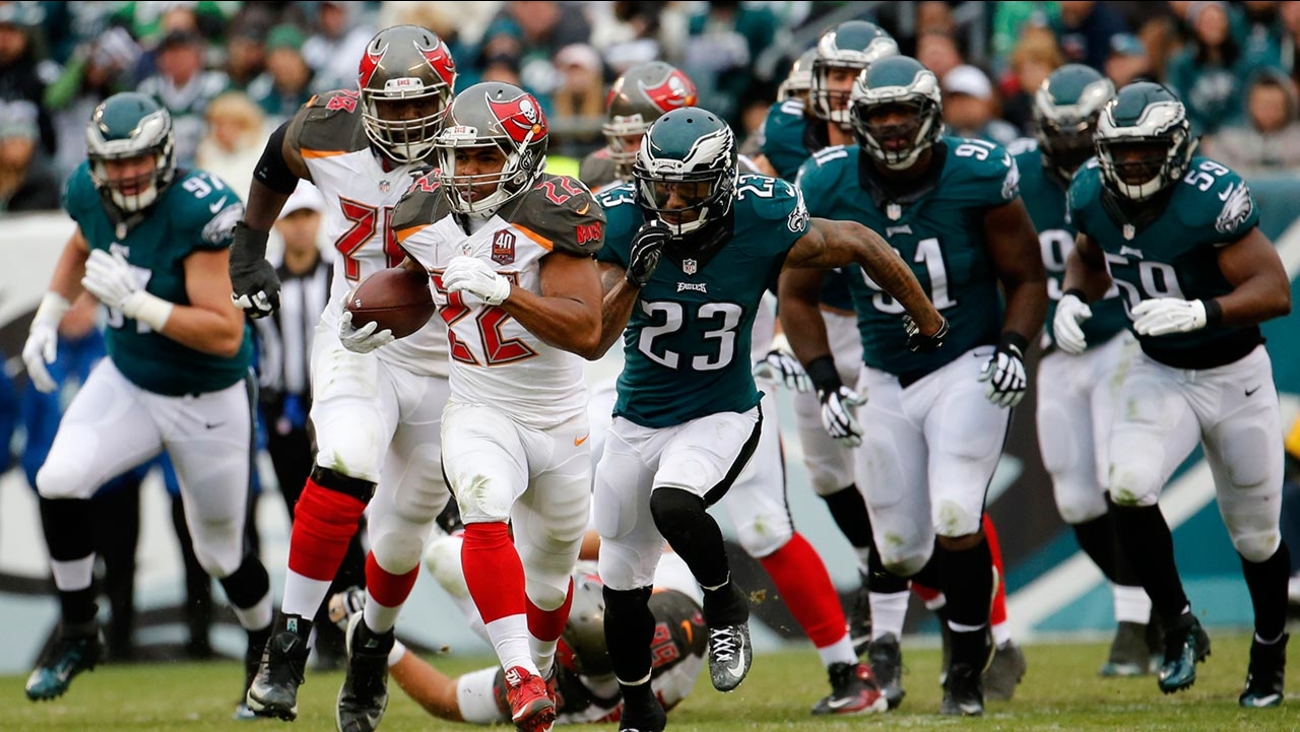 Tampa Bay Buccaneers' Doug Martin (22) rushes during the first half of an NFL football game against the Philadelphia Eagles, Sunday, Nov. 22, 2015, in Philadelphia.

PHILADELPHIA -- Jameis Winston and Doug Martin were an unstoppable combination.

Winston completed 19 of 29 passes for 246 yards and had four of his TD passes in the first half to four different receivers. He tied Matthew Stafford's rookie mark in the third quarter on an 8-yard toss to Cameron Brate, the fifth receiver to catch a TD.

Martin had 177 yards in the first half, including runs of 84 and 58 yards. He finished 2 yards short of tying Barry Sanders' record for most without a TD. Sanders had 237 for the Lions against Tampa in 1994.

Tampa set a franchise record with 283 yards rushing and 521 total yards and were second most in franchise history in the regular season .

The Buccaneers (5-5) have won two straight games for the first time in two years. The Eagles (4-6) have lost two in a row, but are only one game behind the New York Giants (5-5) in the mediocre NFC East.

Mark Sanchez threw a pair of TD passes in his first start replacing injured Sam Bradford, but Chip Kelly's offense couldn't keep up with Winston and the Buccaneers.

Winston and the Buccaneers were outstanding on third downs, converting 9 of 12 while building a 35-14 lead. Winston's last three TD passes came on third downs.

After an offside penalty on Brandon Graham gave Tampa another chance on third down in the first quarter, Martin broke free for 58 yards. Winston then tossed a 4-yard pass to Mike Evans to tie it 7-7.

Winston threw a 17-yard screen pass to Charles Sims on third-and-6 to extend another drive, hit Evans for 25 yards and connected with Vincent Jackson over the middle for a 13-yard TD on the first play of the second quarter.

Martin later burst up the middle for 84 yards to the 1. On third down from the 4, Winston found Russell Shepard in the back of the end zone for a 21-7 lead.

The Eagles answered quickly as Sanchez hit Darren Sproles for a 35-yard TD on a screen pass. But the Buccaneers came right back. Martin ran for 3 yards on fourth-and-1 and Winston tossed a 14-yard pass to Sims for a 28-14 lead.

Winston's pass to Brate made it 35-14. Lavonte David returned an interception 20 yards for a TD to cap the scoring.

The Eagles got a break after DeMarco Murray fumbled on the third play from scrimmage. Jacquies Smith recovered but was stripped by Zach Ertz and Philadelphia got the ball back at its 14.

That gave the Eagles more takeaways by their offense in the past two games than by their defense.

One play after running for 11 yards to the Buccaneers 39, Sanchez hit Josh Huff across the middle. Huff made a couple nifty moves and ran in to give the Eagles a 7-0 lead.

The Eagles punted on their next four drives.