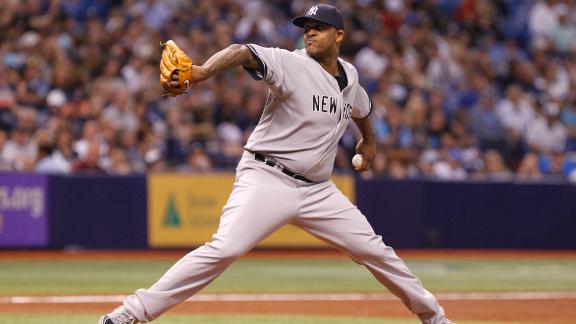 ST. PETERSBURG, Fla. -- For the third time in his tenure with the New York Yankees, CC Sabathia has been the beneficiary of a triple play.

Thursday night's gem was a classic 5-4-3 started by rookie Yangervis Solarte on a one-hopper right over third base by Sean Rodriguez.

Solarte had the presence of mind to step on third before firing to Brian Roberts at second, but the best was yet to come when Roberts' throw skipped in to Scott Sizemore, playing his first game at first base.

Sizemore made a perfect scoop to pick the throw and complete the treble, ending a second-inning threat by the Tampa Bay Rays. The Yankees went on to win the game 10-2.

"It's cool," Sizemore said. "Everyone gets so jacked up about it. Everyone was just laughing."

"As soon as it happened, I thought, 'I've never been a part of one of those,'" Roberts said. "Apparently CC does it all the time, though."

The Yankees first turned a triple play for Sabathia on April 22, 2010, in Oakland, a conventional 5-4-3, in a game that was better remembered for Athletics pitcher Dallas Braden shouting for Alex Rodriguez to "Get off my mound!"

The Yankees now have turned 24 triple plays in their history.

"It was lucky, man," Sabathia said. "Unbelievable. I was just trying to make a pitch to get a double play there."

Yankees Turn Triple Play In Win
The Yankees turned the first triple play in the MLB this season and CC Sabathia struck out six over seven strong innings as the Yankees crushed the Rays 10-2.