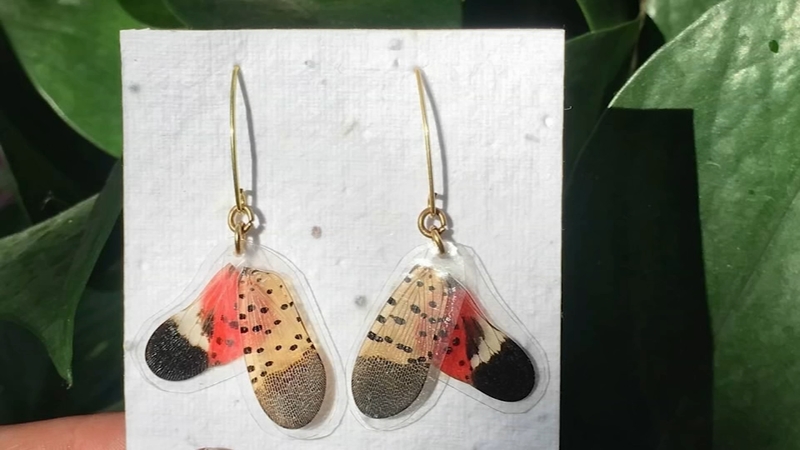 GLADWYNE, Pennsylvania (WPVI) -- It's pretty much common knowledge at this point that you should squish a spotted lanternfly when you see one.

"I say sorry before I do it because I feel bad," said Candice Jeffries of West Philadelphia.

Jeffries works at the Lower Merion Conservancy where she sees firsthand how the infestation is affecting nature.

Scientists in Delaware import wasps to fight spotted lanternflies. Beccah Hendrickson has more on Action News at 6 p.m. on September 19, 2019.

"It's really the human impact and I would love to lessen the human impact on nature," she said. Once Jeffries squishes the bugs, she puts them in a jar. She's collecting them to turn the wings into jewelry.

Jeffries posted a few pictures of the finished jewelry on social media, also promoting her art business, TheWhitmanFox. The pictures immediately started getting a lot of attention and she's already sold out her first order.

Now that she's started the business, she said she's going to be looking for lanternflies anywhere she goes. It's probably not the solution anyone saw coming, but Jeffries hopes one small squash from her will eventually help put her jewelry line out of business.

"Eventually we're going to wipe these suckers out and there won't be any more so it'll be a good problem to have," she said.

Tim Cheney from the Edge Hill Rounders was musically inspired when he killed his first spotted lanternfly.