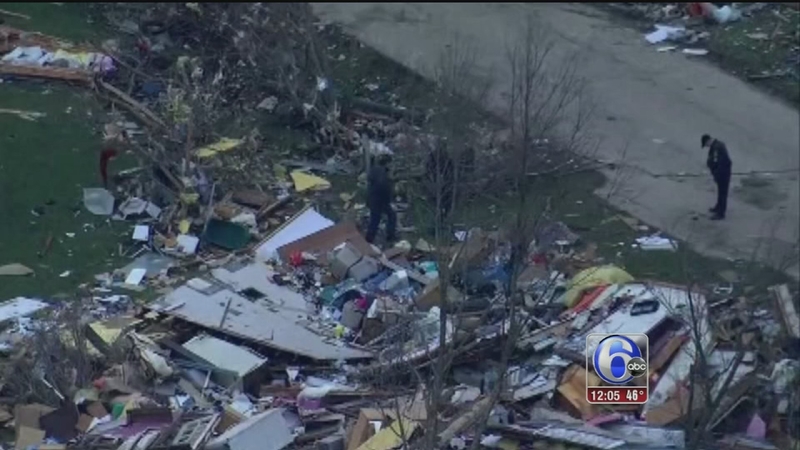 FAIRDALE, Ill. -- The two women killed by a devastating tornado system that barreled through northern Illinois shared a friendship, favors and, ultimately, a neighborhood that turned out to be a prime target of a twister that also leveled much of their rural hamlet.

Jacklyn Klosa, 69, was found Friday morning in the rubble of her Fairdale home, not far from where Geraldine Schultz, 67, died Thursday night when the tornado bore down on their neighborhood. The storm cut through the region about 80 miles west of Chicago, injuring more than a dozen and ripping buildings from their foundations.

Schultz, known as "Geri," and remembered by neighbors in the community of about 150 people as kind-hearted, hosted annual Christmas parties and made a point of driving Klosa to clinics for medical treatment. Klosa, known as "Jackie," was described by friends as a friendly and quick-witted woman who spoke her mind.

The county coroner said Klosa, who had no basement, took shelter in her shower; she was found clutching her purse.

Klosa "was just one of the most friendly people in the world, a wonderful mother and a wonderful friend," said Les Bellah, mayor of neighboring Kirkland, recalling the "big ol' hug" he got from her recently but also how she'd "let you know" if she was upset with you. "You never had to wonder what she was thinking."

At least two tornadoes touched down in the six-county vicinity. Most of the injuries weren't considered serious. To the south in Ogle County, no one was injured although the tornado system caused severe damage to roughly 30 buildings in Rochelle and others in Flagg Township, according to Sherriff Brian VanVickle - who lost his own home.

Illinois Gov. Bruce Rauner declared both Ogle and DeKalb counties as disaster areas, facilitating the use of state resources in the recovery efforts.

"We are very blessed that more people were not hurt. This was a devastating storm," Rauner said in the town of Flagg after touring the damage.

National Weather Service meteorologist Jamie Enderlen said at least one tornado touched down near Fairdale and was initially rated an EF4, meaning it was capable of producing winds up to 200 mph. Damage survey teams were working Friday to officially determine how long tornadoes stayed on the ground, their strength and extent of the damage.

In Illinois, Fairdale was the hardest hit, though the storm also collapsed buildings in surrounding towns, including a restaurant in Rochelle from which a dozen people had to be dug out of a storm cellar. At least several individual farms near Fairdale were also struck.

Fairdale has no village government, no school, no cable TV and no major businesses. Some residents kept horses in town; one family found one of its horses dead amid the debris Friday afternoon.

Children are bused to nearby Kirkland, where classes were canceled Friday. Gas lines to most other communities in the area also don't reach Fairdale - meaning residents relied on tanks of propane, the first thing that survivors smelled when they emerged from their shattered homes Thursday night.

"The rent was cheap over there," Bellah said. "It was unincorporated and people, they liked to live there because they didn't have to put up with a lot of 'government bull crap,' so to speak."

Kirkland firefighter Carl Bunder said there had already been an outpouring of help, with people calling in from all over the region offering to lend trucks, chainsaws or tractors.

All Fairdale homes were evacuated, in part, because of a lack of electricity. But trees, power lines and debris lay strewn on the ground, posing a safety hazard. Roofs from buildings were missing. Metal siding from barns were wrapped around trees.

Crews spent Thursday night and Friday going through the wreckage looking for missing residents, but authorities expressed confidence by the afternoon that they'd accounted for everyone.

Residents gathered Friday at a roadblock a mile from town, eager to check the damage to their homes. Police said it was too dangerous, and authorities said residents would likely be able to return by Saturday.

Al Zammuto, a 60-year-old machinist, was among those trying to get back in. He recalled the evening before when he and other residents received cellphone alerts at 6:45 p.m. - the town doesn't have sirens - but he dismissed it, as previous warnings hadn't amounted to anything.

Then his windows exploded.

Joe Benedetto, 55, who lives just outside Fairdale, saw the tornado roll into the community and likened the sound to "a giant vacuum cleaner." While his house was spared major damage, powerful winds launched a single branch, like a spear, though his kitchen wall.

Zammuto, in Fairdale itself, took cover as the severe weather struck. Bricks were torn off the side of his home. Minutes later he stepped outside, and he said the town looked trashed "looked like a landfill" and the sounds were haunting.

Sue Meyer, an artist who lived a few houses away and knew Klosa and Schultz, also had no basement. She took refuge under some stairs and survived even as her roof collapsed in on her.

Meyer moved to Fairdale for small-town serenity, but her community was unrecognizable moments after the weather struck. She described an "eerie" scene of people wandering everywhere, and said she was so disoriented in the chaos it was impossible to know who may have survived.

She learned only later, on the news, that her nearby neighbors Klosa and Schultz had not.