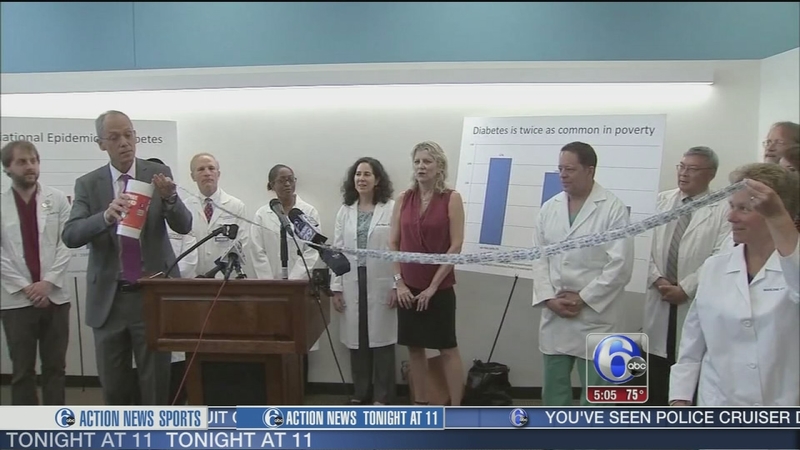 They say it will help curb the city's growing rates of obesity and diabetes.

The mayor says the health benefits are not the main reason for the proposed tax, but many healthcare providers say it is an added bonus and they feel compelled to support it.

He says while there are plenty of other unhealthy foods, sugary drinks are the biggest single source of added sugar.

He was joined by more than a dozen other doctors and nurses inside the Puentes de Salud clinic on South Street to publicly support the proposed tax on sugary drinks.

"It's hard after a certain point of cleaning up the mess not to say let's prevent the mess," Dr. Steven Larson, Executive Director and Co-founder of Puentes de Salud, said.

Mayor Kenney says revenue from the tax will help expand access to pre-K programs. Most support that, but many strongly oppose funding it with a soda tax.

"It's a discriminatory tax, it's a regressive tax," Larry Miller of Philadelphians against the Grocery Tax said.

Miller says it'll hit low-income families unfairly and could also put some people out of work.

"At least 2,000 jobs that are on the line, small business will feel this also," Miller said.

Dr. Farley's response to that is diabetes is also regressive. It's more common among people living in poverty.

"The people who are going to preferentially benefit from this are people with low income," Farley said.

Studies have shown taxing sugary drinks leads to less consumption and improved health, whether it will work here is still a debate.

"It's unworkable because people will just buy it across the city lines somewhere," Paul Boyle of Center City said.

As of now, an official vote has not been scheduled. Advocates say they do not have enough votes to support the proposed tax at this time.