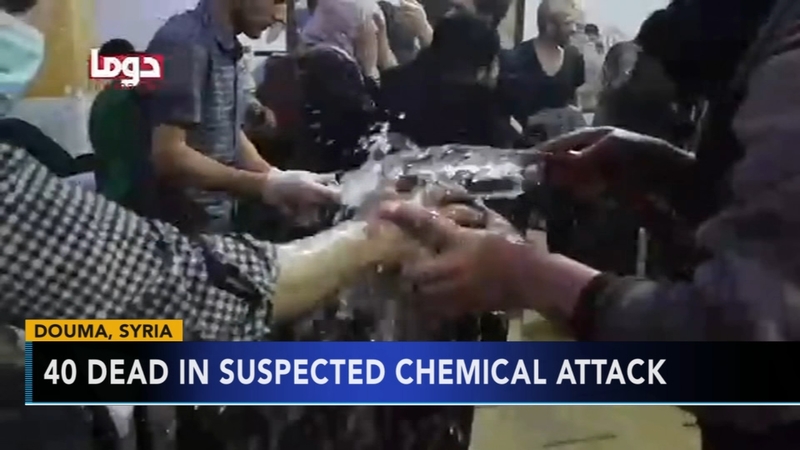 BEIRUT -- Syrian opposition activists and rescuers said Sunday that a poison gas attack on a rebel-held town near the capital killed at least 40 people, allegations denied by the Syrian government.

The alleged attack in the town of Douma occurred late Saturday amid a resumed offensive by Syrian government forces after the collapse of a truce with the Army of Islam rebel group.

The reports could not be independently verified.

First responders said they found families suffocated in their homes and shelters, with foam on their mouths. The opposition-linked Syrian Civil Defense were able to document 42 fatalities but were impeded from searching further by strong odors that gave their rescuers difficulties breathing, said Siraj Mahmoud, a spokesman for the group, which is known as the White Helmets.

Government forces agreed to a two-hour cease-fire in Douma on Sunday after the Army of Islam asked to restart talks to end the assault, according to the state-affiliated al-Ikhbariya TV station.

Douma has been devastated by close to five years of siege at the hands of government forces. It was once one of the hubs of the 2011 Arab Spring-styled uprising against President Bashar Assad's government.

In recent weeks, government forces have recaptured villages and towns in the eastern Ghouta suburbs of the capital. Douma is the only town left holding out.

The government demanded that the Army of Islam release prisoners and stops their shelling of Damascus as a precondition to resuming talks, according to al-Ikhbariya. The station said government negotiators met with a delegation of rebels at a checkpoint outside Douma.

A joint statement by the Civil Defense and the Syrian American Medical Society, a relief organization, said that more than 500 people, mostly women and children, were brought to medical centers with difficulty breathing, foaming at the mouth, and burning sensations in the eyes. It said patients gave off a chlorine-like smell. Some had bluish skin, a sign of oxygen deprivation.

It said the symptoms were consistent with chemical exposure. One patient, a woman, had convulsions and pinpoint pupils, suggesting exposure to a nerve agent.

The Syrian Observatory for Human Rights said at least 80 people were killed in Douma on Saturday, including around 40 who died from suffocation. But it said the suffocations were the result of shelters collapsing on people inside them.

"Until this minute, no one has been able to find out the kind of agent that was used," said Mahmoud, the White Helmets' spokesman, in a video statement from Syria.

He said the government was also targeting homes, clinics, and first responder facilities with conventional explosives and barrel bombs. Most of the medical points and ambulances of the town have been put out of service.

Videos posted online by the White Helmets showed victims, including toddlers in diapers, breathing through oxygen masks at makeshift hospitals.

The Syrian government, in a statement posted on the state-run news agency SANA, strongly denied the allegations. It said the claims were "fabrications" by the Army of Islam, calling it a "failed attempt" to impede government advances.

"The army, which is advancing rapidly and with determination, does not need to use any kind of chemical agents," the statement said.

The Army of Islam was negotiating with Russia, an ally of Damascus, to withdraw its fighters and allow government institutions back into the town, according to the Observatory. An agreement was said to have Russia deploy its military police to take guardianship of the town as Army of Islam fighters handed over their heavy weapons, the group added, but those talks collapsed on Friday, prompting the government to start shelling and bombing Douma indiscriminately.

Hundreds of fighters and their relatives had already left Douma for rebel-held areas in northern Syria.

The alleged gas attack in Douma comes almost exactly a year after a chemical attack in the northern Syrian town of Khan Sheikhoun killed dozens of people. That attack prompted the U.S. to launch several dozen Tomahawk cruise missiles at a Syrian air base. President Donald Trump said the attack was meant to deter further Syrian use of illegal weapons.

"These reports, if confirmed, are horrifying and demand an immediate response by the international community," she said in a statement late Saturday.

The Syrian government and its ally, Russia, denied any involvement in the alleged gas attack.

Maj. Gen. Yuri Yevtushenko was quoted by Russian news agencies on Sunday as saying Russia was prepared to send specialists to Douma to "confirm the fabricated nature" of the reports.

A chemical attack in eastern Ghouta in 2013 that was widely blamed on government forces killed hundreds of people, prompting the U.S. to threaten military action before later backing down.

Syria denies ever using chemical weapons during the seven-year civil war, and says it eliminated its chemical arsenal under a 2013 agreement brokered by the U.S. and Russia after the attack in eastern Ghouta.