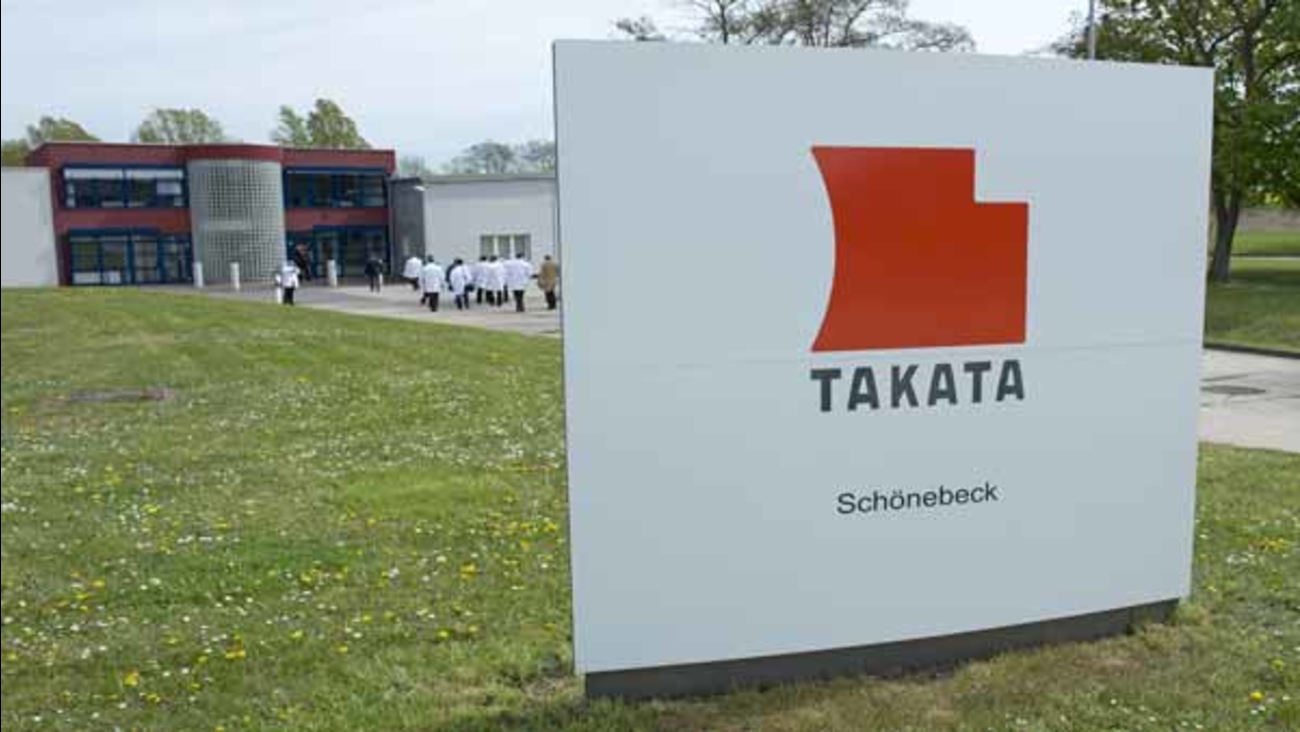 Under an agreement with the government, Takata will phase out manufacture of air bag inflators that use ammonium nitrate, the propellant blamed for the explosions. It also agreed to a schedule over the next two years for replacing many of the devices already in use.

And unless it can prove they are safe, Takata may have to recall all its inflators, even those not yet implicated in the mess.

The company admitted that it knew for years that the inflators were defective but that it fended off recalls by failing to tell the National Highway Traffic Safety Administration.

In a statement, Takata CEO Shigehisa Takada said the company regrets the circumstances that led to the NHTSA agreement and will work to develop a new generation of inflators. He said the settlement will "enable us to focus on rebuilding the trust of automakers, regulators and the driving public."

Under the five-year pact, NHTSA can increase the penalty to a record $200 million if the company fails to abide by the terms.

The biggest fine ever handed out by NHTSA is the $105 million levied against Fiat Chrysler earlier this year for failing to report safety problems and follow through on 23 recalls.

Takata's inflators can rupture and hurl shrapnel at drivers and passengers in a crash. So far, about 23.4 million driver's-side and passenger-side inflators have been recalled on 19.2 million U.S. vehicles sold by 12 automakers.

NHTSA Administrator Mark Rosekind said Takata's misconduct dates to at least 2009, when it failed to tell the agency about the problem. Automakers must notify NHTSA of defects within five days of discovering them.

Honda, Takata's biggest customer, essentially fired the supplier Tuesday. All of the air bag-related deaths reported so far have been in Honda vehicles.

"The penalty seems small compared to the consequences of the concealment and disregard" for the law, complained Sen. Richard Blumenthal, D-Conn., a frequent NHTSA and Takata critic.

Takata's air bags are inflated by an explosion of ammonium nitrate, and investigators have found so far that prolonged exposure to airborne moisture can cause the propellant to burn too fast. That can blow apart a metal canister and shoot out fragments.

Most of those injured or killed lived in high-humidity states along the Gulf of Mexico. The injuries included severe neck cuts and facial injuries, as well as the loss of eyesight and hearing.

"Unless new evidence emerges, the company will have to recall all of its inflators," even those in car models not implicated up to now, Foxx said. He said he was unsure how many air bags that would amount to.

Kelley Blue Book senior analyst Rebecca Lindland said Takata has a long ways to go and still needs to find the root cause of the problem.

But she said it was too early to declare it as finished because it makes a variety of products, such as seat belts and steering wheels - as long as it responds properly, going forward.

"I don't know if it's enough to take the company down," she said in a telephone interview. "I think they will weather the storm, but they need to come clean."

Sen. Bill Nelson of Florida, where numerous air bag ruptures have been reported, said he is worried that Takata will be able to sell ammonium nitrate inflators until the end of 2018.

"We urgently need to redouble efforts to get the recalled vehicles fixed and get the old ammonium nitrate-based inflators out," Nelson said.

The agreement also calls for the appointment of an independent monitor who will make sure Takata abides by its terms.