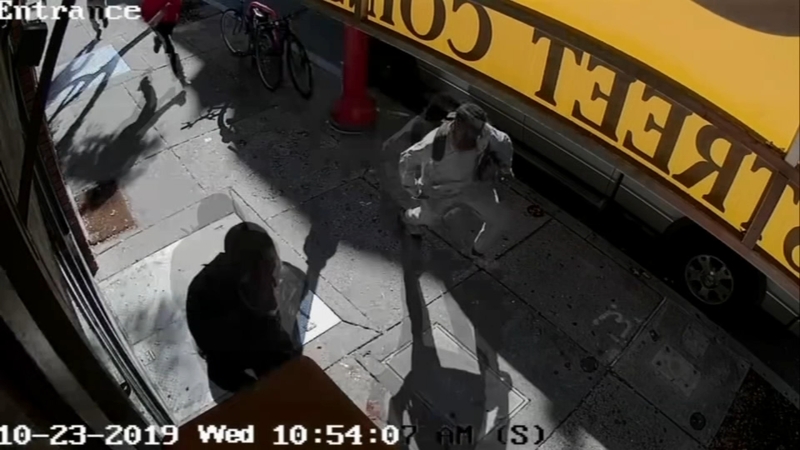 PHILADELPHIA (WPVI) -- Police are investigating to see if a chain of thefts may be related.

On October 14 around 3 p.m. at 300 South 2nd Street, Philadelphia police said a group of teens physically assaulted a 27-year-old man and robbed him of his Apple iPhone 6S Plus. The suspects then fled north on 2nd Street from that location.

On October 23 around 11 a.m., surveillance video captured a group of teens running with a laptop that was stolen from The Bean Cafe on South Street.

Michael Fortin said the laptop was stolen from him.

"It was a sunny day, and the sun was in the window so you can't really see their faces," said Fortin.

He said he was sitting at a table working on his Mac when it was picked up by one of the teens in the group, who then ran out of the store.

"There was a crowd of people pretending they wanted to order something, asking the baristas from the door, and then several people surrounded me," said Fortin, who lives in South Philadelphia.

A group of teens struck again on the 200 block of South 13th street where police said a group attacked two women on the morning of October 25, stealing a cell phone.

"These kids are young, they should be having fun not committing crimes and stealing," said James Gilmore, owner of The Bean Cafe.

"People might be scared, it's not good at all it hurts more than one thing," said Gilmore.

Police are looking into if this is the same group of teens stealing electronics. If you recognize any of the people in the video you are asked to call Philadelphia police.
Report a correction or typo
Related topics:
philadelphiacrimetheftphiladelphia police
Copyright © 2022 WPVI-TV. All Rights Reserved.
TOP STORIES
Visitors fill the Jersey Shore for Memorial Day weekend
Police: Triple shooting leaves 1 dead in West Oak Lane
One man dead after West Philadelphia shooting
AccuWeather: Sunny & Pleasant Sunday
'Is it worth my kid?' Parents of TX school shooting victim speak out
Officials ID 5 killed in Pottstown explosion; most were children
Official admits police made 'wrong decision' in TX shooting
Show More
Victim of elementary school attack says it could have been prevented
North Philly store owner robbed, assaulted with brick: Police
Dann Cuellar retires after 34 years at Action News
Another Trenton, NJ firehouse hit by gunfire
Rainy start to Memorial Day weekend at the Jersey Shore
More TOP STORIES News