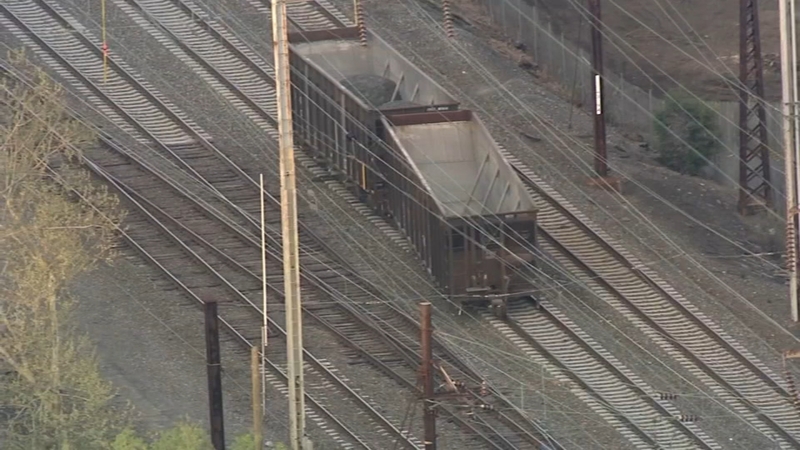 Watch video from the Action Cam and Chopper 6 after a freight train derailed in Delaware County on May 3, 2018.

Earlier at 30th Street Station in Center City, and in Wilmington, Delaware, commuters were stuck trying to find ways around the service disruptions.

Then Amtrak's Northeast Corridor service between Philadelphia and Washington, D.C. was also suspended after initially operating with delays.

While Amtrak resumed service, SEPTA announced the Wilmington-Newark line would remain suspended for the remainder of the day.

If needed, SEPTA will add p.m. rush-hour trains on the Media/Elwyn Line to accommodate passengers.

SEPTA also expects to be able to operate some limited service on the Wilmington/Newark Line on Friday.

All possible options are being explored.

"SEPTA Wilmington/Newark Line trains operate on these tracks, which are part of Amtrak's Northeast Corridor. Multiple tracks remain out of service due to ongoing repair work," SEPTA said.

Newark: Service is suspended for the remainder of the service day due to a derailment on Amtrak and multiple tracks remaining out of service for extensive repair. We hope to provide more information as soon as updates are available.

Around 11:30 p.m. Wednesday, a Norfolk Southern freight train with two engines and 88 cars was five miles north of Marcus Hook, near the Eddystone and Crum Lynne stations, when the last two cars derailed.

No one was hurt, but the very last car tipped over spilling stones onto the tracks.

Crews hauled in cranes to help with the clearing effort.

While several tracks were running by late morning, Amtrak says Track 3, where the incident occurred, will remain closed for at least a few days for switch and railroad tie repairs.

Wheels from a Norfolk Southern freight train left along the tracks in Crum Lynne, PA following a train derailment this morning. @6abc pic.twitter.com/JLjR6XKG6H

Schedule details will be finalized by this evening and posted on SEPTA's website.