What happened during President Trump's first year? A timeline of key events 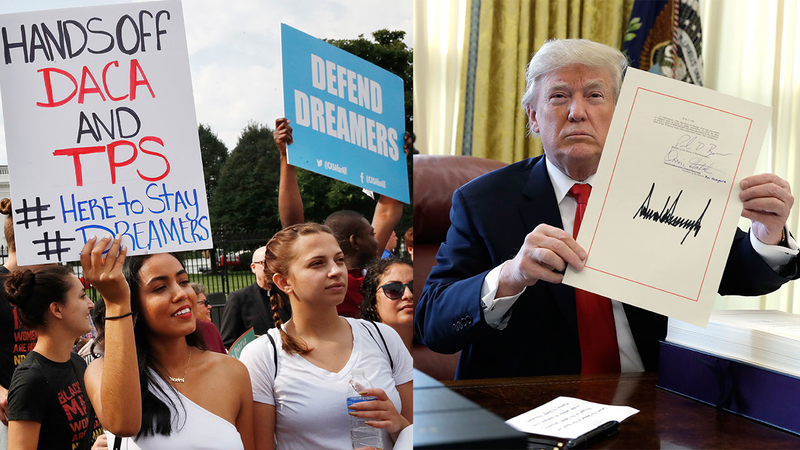 Five days into office, Trump signed an executive order to advance the progress of the controversial Keystone and Dakota Access Pipelines. Demonstrators had been camped out in protest of the construction of the Dakota Access Pipeline for nearly a year. Most of them voluntarily left the camp before the February deadline, but some refused and were arrested.

Jan. 27: Travel ban
Trump signed an executive order restricting entry to the U.S. from certain Muslim-majority countries for the next 90 days. The order was met with protests, particularly at airports, and was blocked by the 9th Circuit Court of Appeals in February. The ban is currently in its third iteration. In December, the Supreme Court ruled that travel ban 3.0 could go into effect while the lower courts heard appeals.

Everybody is arguing whether or not it is a BAN. Call it what you want, it is about keeping bad people (with bad intentions) out of country!

RELATED: Notable firings and resignations under the Trump administration

National Security Advisor Michael Flynn resigned on the evening of Feb. 13 amid controversy over his relationship with Russia. In his resignation letter, Flynn said that he "inadvertently" gave "incomplete information" about phone calls with the Russian ambassador.

The U.S. initiated a missile strike on a Syrian airbase. The strike came in response to a chemical weapons attack in Syria earlier that week that left at least 86 civilians dead.

April 13: U.S. drops "Mother of All Bombs" on Afghanistan

The U.S. military dropped on Afghanistan the largest non-nuclear bomb it had ever used in combat. The GBU-43, or massive ordnance air blast (MOAB), nicknamed the "Mother of All Bombs," targeted a complex of ISIS-K-controlled caves. The attack killed at least 94 militants, according to an Afghan official.

In a controversial move, Trump announced he was removing James Comey, the director of the Federal Bureau of Investigations, from office. Comey had confirmed in March that the FBI was looking into ties between Russia and Trump's 2016 presidential campaign. At the time of Comey's firing, the White House released a statement that Trump was acting on recommendations from Deputy Attorney General Rod Rosenstein and Attorney General Jeff Sessions. Days later, the Department of Justice appointed Robert Mueller as special counsel to oversee the investigation. In November, ABC News learned that Mueller's investigation was interested in learning more about Comey's firing.

"We thought that was very important because, obviously, people have tried to portray the president in a certain way, but I think that what he wants to do is solve the same problem that a lot of the leaders in the Islamic world want to do," a senior administration official told ABC News at the time.

More than a year after the sudden death of Justice Antonin Scalia, Trump's nominee for the U.S. Supreme Court, Neil Gorsuch, was confirmed on April 7.

President Obama's nominee, Merrick Garland, was not considered because Senate Republicans argued that the next president should choose the nominee. Trump nominated Gorsuch in January.

The former 10th Circuit Court of Appeals judge was confirmed after a historic rule change in the Senate, and he was sworn in on April 10. His investiture ceremony, which was attended by Trump, came on June 15.

The president's first press secretary announced his resignation in late July, saying that the White House needed "to get a fresh start."

"I think there is a time that we can start taking down the temperature and getting back to a more constructive and civil dialogue," Spicer said during his first post-resignation interview with Jimmy Kimmel. "I think we could all use a dose of that."

July 26: Trump says that transgender people will no longer be allowed in the military

After consultation with my Generals and military experts, please be advised that the United States Government will not accept or allow......

....Transgender individuals to serve in any capacity in the U.S. Military. Our military must be focused on decisive and overwhelming.....

....victory and cannot be burdened with the tremendous medical costs and disruption that transgender in the military would entail. Thank you

Trump tweeted that transgender people would not be accepted into the military in the future, reversing an Obama-era policy. As of Jan. 19, 2018, transgender people are still allowed to enlist and serve while the president's request is appealed. Meanwhile, the Pentagon is expected to release a study about the issue in the coming weeks.

Amid ongoing tensions with North Korea, Trump issued a warning on August 8.

The phrase "fire and fury" would again be associated with the administration when a book of the same name was released in January 2018. The author, Michael Wolff, said he spent much of Trump's first year with a "something like a semi-permanent seat on a couch in the West Wing" in order to write his salacious expose. The White House denies this and many of the other claims from the book.

Aug. 12: Trump condemns violence "on many sides" after rally death

Trump came under fire for suggesting that violence at a "Unite the Right" rally in Charlottesville, Virginia, had been caused by "many sides." At the rally, white supremacists and neo-Nazis clashed with counter-protesters. As the violence escalated, a white nationalist rammed his car into a crowd, killing a 32-year-old woman.

Trump's initial response on Twitter condemned the violence and called for unity, but in his first public remarks, Trump did not specifically blame white nationalists or neo-Nazis.

"We condemn in the strongest possible terms this egregious display of hatred, bigotry and violence on many sides. On many sides," he said.

Trump said that he would be putting an end to the Obama-era Deferred Action for Childhood Arrivals program. It provided legal protections to immigrants, known as "Dreamers," who were brought to the U.S. as children. A federal judge in California issued an injunction to prevent the program from ending, but the Department of Justice is seeking a review by the Supreme Court.

One of Trump's main campaign promises was to "repeal and replace Obamacare." Though he did not accomplish that in his first year, the Trump administration did dismantle parts of the Affordable Care Act.

In October, Trump signed an executive order "taking the first steps to providing millions of Americans with Obamacare relief," according to Trump. The order included an end to subsidies, which the Trump administration said were unlawful, intended to help low-income Americans pay for healthcare.

The mandate that all Americans have healthcare was also removed when Trump signed his tax bill in December.

Just before beginning his Christmas vacation, the president signed the $1.5 trillion Tax Cuts and Jobs Act into law. Trump called it a bill for the middle class and for jobs.

During a meeting about immigration reform, the president asked why the United States would want to accept immigrants from Haiti, Africa, and "other s***hole countries," according to multiple sources familiar with the meeting. Experts are split on whether these comments will hurt the case for his travel ban, which is currently in appeals.