Defiant Ukrainian president refuses US offer to evacuate: 'I need ammunition, not a ride' 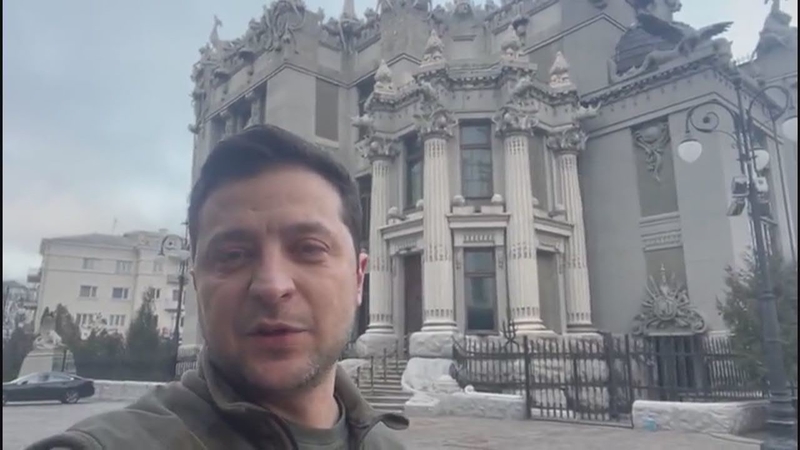 KYIV, Ukraine -- As Russian troops closed in on Ukraine's capital Saturday and thousands of refugees continued to flee the country, several Ukrainian officials vowed to remain in Kyiv and fight against the aggression.

A defiant Ukrainian President Volodymyr Zelenskyy was asked to evacuate Kyiv at the behest of the U.S. government but turned down the offer.

He said in response: "The fight is here; I need ammunition, not a ride," according to a senior American intelligence official with direct knowledge of the conversation, who described Zelenskyy as upbeat.

Surrounded by his advisers and wearing combat fatigues, Zelenskyy addressed the country Friday while standing outside his office on the streets of central Kyiv.

"We are all here. Our military are here, as are our people and whole society," Zelenskyy said in a selfie-style video posted to Facebook. "We're all here defending our independence and our country. And we'll go on doing that. Glory to our defenders! Glory to Ukraine."

Hours later, Zelenskyy warned during a televised address that he believed Russian troops would storm the capital overnight.

"The night will be more difficult than the day," he said, as the sound of shelling and loud booms from airstrikes could be heard over Kyiv.

"We cannot lose Kyiv," he said.

ABC News contributor and retired Col. Steve Ganyard explains what the Russian military next in Ukraine on Saturday, Feb. 26.

Vitali Klitschko, the mayor of Kyiv and a legendary boxer, also said he will stand and fight for his city alongside his brother Wladimir, also a former heavyweight champion boxer. "I don't have another choice," Vitali told "Good Morning Britain" on Thursday.

"Words are followed by missiles and tanks. Destruction and death come upon us. ... We will defend ourselves with all our might and fight for freedom and democracy," Wladimir wrote on Linkedin Thursday.

Several members of Ukraine's parliament said they were remaining in the city and prepared to defend themselves as Russia's military continued its attack.

"I'm at the center of Kyiv and I will remain here," Kira Rudik, the leader of the political party Holos, told CNN Friday.

"I'm a member of parliament and the leader of the party. It is my duty to be here," she said.

Rudik said she could hear airstrikes as she spoke to CNN, and that she has had to hide in a bomb shelter multiple times since the Russian military launched its attack on Ukraine Thursday morning.

"There is lots of stress and it is not really helping the morale of the people, being under the airstrikes all the time," she said.

Lines of vehicles miles long are clogging border crossings out of Ukraine on Saturday as residents rushed to escape danger from invading Russian troops that were advancing toward the Ukrainian capital of Kyiv.

Rudik said she was prepared to "bear arms," and that she and members of her "crew" had received Kalashnikov assault rifles "so we will be able to resist if Russian forces will come to Kyiv."

Parliament member Sviatoslav Yurash said in an interview with BBC Radio 4 Friday morning he was "looking at my AK-47 in front of me" as Russian troops closed in on Kyiv.

"We are giving anyone who wants to help Ukraine fight a chance to do that," he said. "We are arming people who will be taking that fight to the Russians in every way."

Yurash said the nation of some 40 million people is "not going to just stand idly by," even as it faces a more powerful military.

"We will fight with everything we have and all the support that the world can provide us," he said.

A past Ukrainian leader also appeared ready to defend the capital. Former President Petro Poroshenko spoke to CNN Friday from the streets of Kyiv with a Kalashnikov in hand.