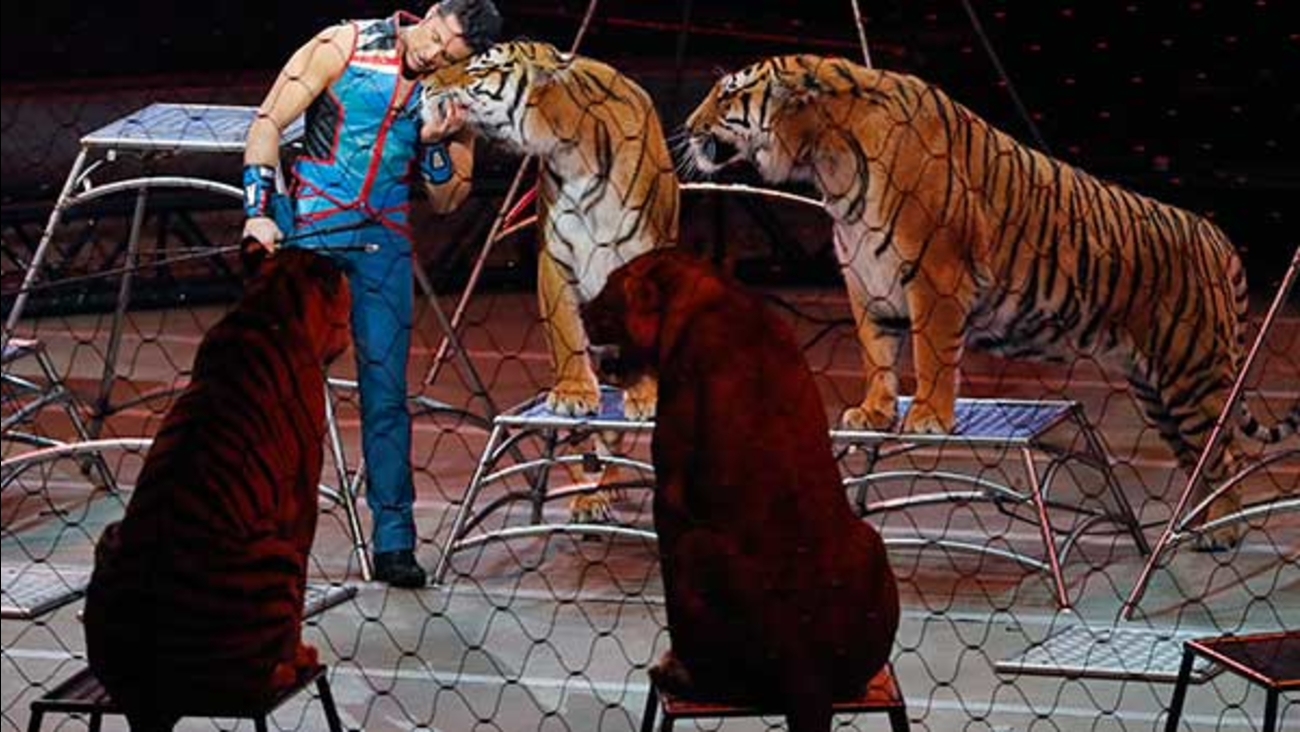 FILE - Big cat trainer Alexander Lacey hugs one of the tigers during the final show of the Ringling Bros. and Barnum & Bailey Circus in Uniondale, N.Y. (AP Photo/Julie Jacobson)

ATLANTA -- Georgia police shot and killed a Bengal tiger on Wednesday after it escaped from a truck and wandered along a major interstate near Atlanta, frightening residents of a nearby subdivision.

Feld Entertainment spokesman Stephen Payne said Suzy, a 6-year-old Bengal tiger that had once performed in the Ringling Bros. and Barnum & Bailey Circus, somehow got loose when the truck hauling 14 big cats stopped south of Atlanta on its way from Florida to Tennessee.

"We stopped in Georgia to feed and water the cats and for a quick rest break for the driver, and that's where we believe the animal escaped and was later confronted by law enforcement," Payne said.

Suzy was headed back to its European owner, animal handler Alexander Lacey, after the circus this year ended its 146-year run, Payne said.

Motorists spotted the tiger early Wednesday along Interstate 75 in Stockbridge, southeast of Atlanta, Henry County police said. The interstate was jammed with traffic as people flee Hurricane Irma that could hit Florida or the Gulf Coast.

The cat ended up in a subdivision, where it began chasing a dog, police said.

The tiger jumped on the dog - a Dachshund named Journey, its owner Brittney Speck told The Atlanta Journal-Constitution . The dog survived the attack and is OK, she said.

The cat was shot after it "became aggressive toward pets in the area," the Georgia Department of Natural Resources said in a statement late Wednesday.

Payne said he didn't know how the tiger managed to get free mid-way through the trip to Tennessee, and didn't have many details of its encounter with police. The driver did not realize one of the animals had gotten loose during the night until the truck arrived in Tennessee, he said.

But early Wednesday morning, neither police nor anyone in the neighborhood knew where the cat had come from - or how it ended up in metropolitan Atlanta. After seeing news reports about the tiger hours after it was killed, a Feld Entertainment employee reached out to authorities in Georgia to let them know they were missing a tiger, state officials said.

The remaining 13 cats were to be transported to Germany. "I believe they will be joining another circus," Payne said.

In September, the Ringling Bros. and Barnum & Bailey Circus ended its storied history with a final show at the Nassau County Coliseum in Uniondale, New York. The performance was Lacey's last big-cat act with the Florida-based circus.

Its parent company, Feld Entertainment, decided to end the circus billed as the Greatest Show on Earth after years of pressure by animal rights activists who objected to having animals travel around the nation and perform. The circus removed elephants from its shows in 2016. When it closed for good the circus cited citing high operating costs and declining attendance as fewer fans came to shows with no elephants.