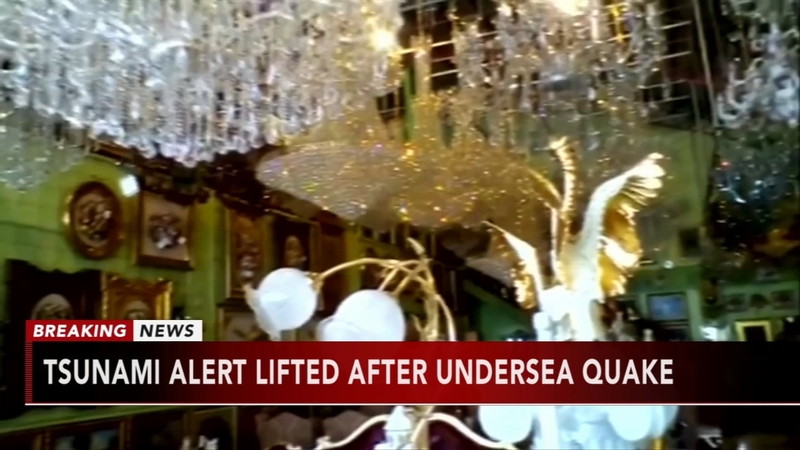 MANILA, Philippines -- A powerful undersea earthquake struck off the southern Philippines on Saturday, prompting people to scramble out of shopping malls and buildings and authorities to warn villagers to stay away from beaches in case of a tsunami.

No casualties or damage were reported hours after the quake struck before noon, and the Pacific Tsunami Warning Center lifted its warning for a potential tsunami that it had said could hit coastal areas of the southern Philippines and Indonesia.

The Philippine Institute of Volcanology and Seismology said the quake was detected at a depth of 59 kilometers (37 miles) and a magnitude of 7.2 about 162 kilometers (100 miles) off Davao Oriental province. Several aftershocks, including one with a magnitude of 5.6, were later felt by residents but no major damage was reported, officials said.

The U.S. Geological Survey said the quake had a magnitude of 6.9.

Shortly after the quake struck, Renato Solidum, who heads the quake-monitoring institute, said a major tsunami was unlikely given the quake's depth but his agency advised villagers to avoid beaches in Davao Oriental province and outlying coastal regions for about two hours after the quake hit around noon as a precaution.

The quake was felt in several southern provinces and cities, including in President Rodrigo Duterte's hometown in Davao city and in nearby Tagum City. Shoppers, including children yelling in fear, rushed out of a five-story mall and many occupants abandoned a 26-floor condominium in a commercial district as the ground shook.

Indonesia's Meteorology and Geophysics Agency said the quake didn't have the potential to cause a tsunami affecting that country, which is still reeling after a Dec. 22 tsunami caused by an eruption on a volcanic island killed more than 400 people.

The Philippines and Indonesia lie along the so-called Ring of Fire, a seismically active arc of volcanoes and fault lines in the Pacific Basin.