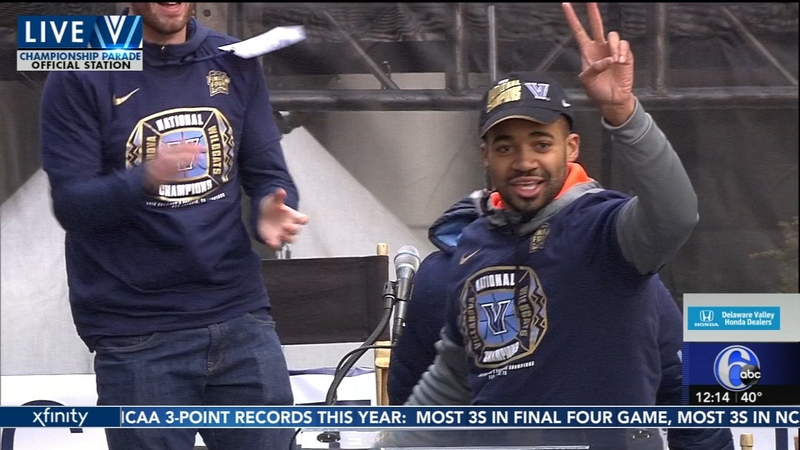 Wright says Booth, who came back to play after suffering a broken hand, is looking to win a third championship at the school.

Booth, the final player to speak at the rally at Dilworth Park, thanked Nova Nation for coming out to the parade and to the games all season.

Then, Booth appeared to be getting emotional.

He said he was speaking from "the bottom of my heart."

Jay Wright calls Jalen Brunson the most mature guy on the program and says he will "leave Villanova as one of the most decorated college basketball players of all time."

A sunglasses-wearing Brunson thanked the fans for their support.

"We couldn't have done it without you. It's really special to be part of this group of guys. I love these guys so much. It's one thing I'm going to treasure forever," Brunson said.

Brunson then said, "Let me bring out the guy you really want to see."

With that the 'Big Ragu' took the stage.

Donte DiVincenzo replied to that: "He put me on the spot here."

DiVincenzo thanked the crowd for coming out to the parade.

"Thanks for coming out today. It means a lot. Thank you guys so much," Bridges said.

It was quick speech for the Malvern-native, but as he walked away from the podium, the crowd began to chant 'one more year.'

Jay Wright broke the news to the crowd that Bridges, a junior, already has his degree and is graduating.

"We are so proud to represent the Big 5, the Big East, and most importantly the great city of Philadelphia, and Philadelphia basketball, which has the greatest tradition in our country," Wright says.

Wright says the Big 5 teams root for one another when they are playing around the country.

"I was afraid to say this during the tournament, but Penn coach Steve Donahue helped us out with the scout of Kansas. I didn't want to say it when we were in the tournament, but there's a tight bind in the Big 5 and we all stick together," Wright says.

The Wildcats played all their home games at the Wells Fargo Center in South Philadelphia this season.

Wright says, "This is truly a Philly team."

The team was then introduced.

Watch the team members being introduced at the Villanova National Championship victory celebration at Dilworth Park on April 5, 2018.

"I'm just so proud of these guys, the way that they elevated our program, took it to new heights. That's all you can ask for as alumni, for the young guys to learn from you and your mistakes," Jenkins said.

Jenkins, who hit the buzzer-beat three-pointer that won the Wildcats the 2016 title, says it is the coaching staff that helped this team break three-point records this season.

He said the 2018 champs played "Villanova basketball" and "dominated."

Jenkins says he hopes every Philadelphia team will be able to experience a parade like the Eagles and Villanova have done this year.

The Villanova Wildcats are on the move and the National Championship Parade is underway.

Action News reporter Chad Pradelli is on board one of the double-decker busses moving down Market Street in Center City Philadelphia.

"This is great. It's great to see all this support," forward Eric Paschall said.

Next, guard Phil Booth stepped up to the mic.

"It's amazing the support we have all year from Nova Nation," Booth said.

Booth, who was a member of the 2016 National Championship, spoke about why this team was so special.

Malvern's Mikal Bridges said it's a great feeling to be part of the parade. He said he thinking two championships when he signed with Villanova.

Bridges said he is not worrying about if this is his last parade with Villanova with the possibility of him going pro after his junior year.

"I'm just going to enjoy this right now and live it up with my guys," Bridges said.

Not everyone who was part of the Villanova Wildcats' championship team was on the court.

Prior to the start of the National Championship Parade, 'Nova players handed the trophy to their bus driver of five years.

The driver posed with the trophy in front of the bus, as the players prepared for the parade down Market Street.

The crowds began to form early in Center City for the Parade of Champions Thursday.

A long line at the Villanova Stop waiting to get to the parade. @6abc pic.twitter.com/s03lPKIMva

The parade kicked off at 11 a.m. at 20th and Market streets and will end at Dilworth Park.

6abc is the official station of the Villanova Championship Parade.