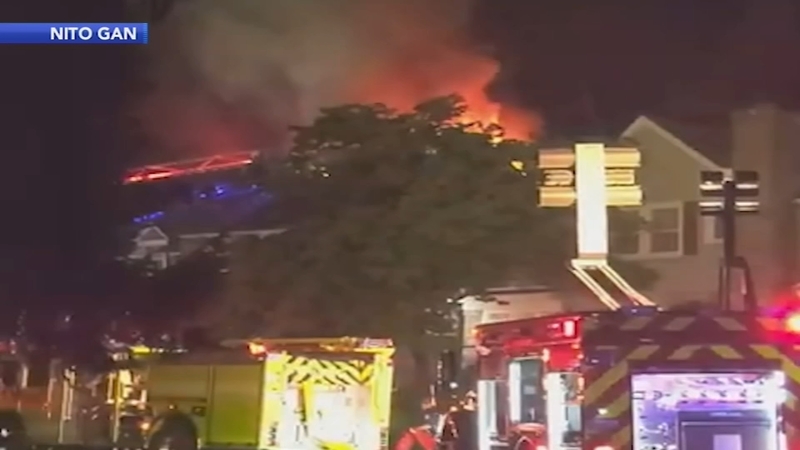 Montco firefighters mourn loss of one of their own

WYNNEWOOD, Pennsylvania (WPVI) -- A firefighter was killed while battling a house fire in Wynnewood, Montgomery County.

The fire occurred just before 11 p.m. Sunday on the unit block Rosedale Road.

An Action News viewer recorded video of the smoke and the flames shooting from the home.

A firefighter was killed while battling a house fire in Wynnewood, Montgomery County.

Officials said Firefighter Sean W. DeMuynck was found unresponsive on the third floor of the home. He was taken to Lankenau Medical Center where he died a short time later.

"The atmosphere changed quickly on us, a lot of heat, a lot of fire," Chief Chas McGarvey of the Lower Merion Fire Department. "We're not quite sure yet what happened to firefighter DeMuynck. He was with two other firefighters at the time. They got out and unfortunately he didn't."

DeMuynck served as a volunteer firefighter since August 2019. He is survived by his wife and parents, officials said.

"This is a very, very sad day," said McGarvey. "We lost a true hero last night."

According to officials, DeMuynck and his wife are Canadian and had planned to move home to rejoin their family on Monday.

"Sean was your classic, all around good guy. He fit in everywhere. He helped with anything," said Chief Ted Schmidt of the Penn Wynne-Overbrook Hills Fire Company.

DeMuynck also loved hockey and served as a video coach for a Canadian junior ice hockey team from 2013 to 2017.

"The entire Windsor Spitfires organization is deeply saddened to hear of the passing of former video coach Sean DeMuynck," said Windsor Spitfires General Manager Bill Bowler. "Sean was an awesome person to be around and always came to the rink well prepared. Sean will be dearly missed by everyone."

No other injuries were reported. A cause of the fire remains under investigation.