The water flooded cars, gushed through businesses and carried trash through the street.
WPVI
By 6abc Digital Staff and Beccah Hendrickson 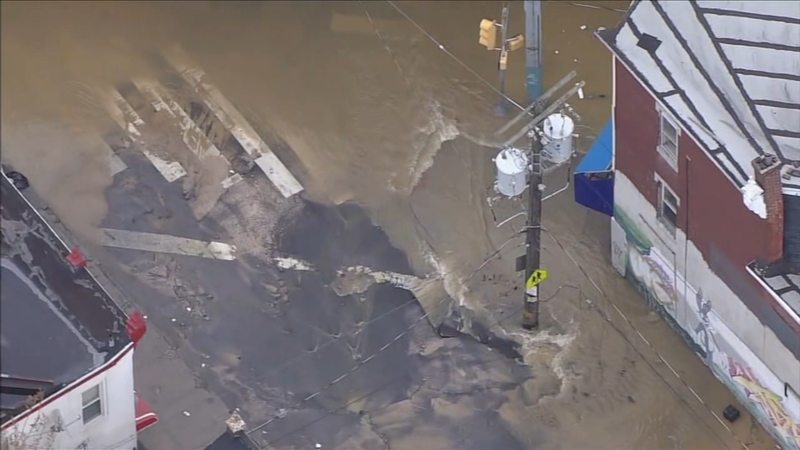 PHILADELPHIA (WPVI) -- Officials in Philadelphia are investigating a water main break Tuesday morning that has caused flooding in the city's Kensington section.

Emergency crews were called for the main break around 10:30 a.m. near the intersection of F and Clearfield streets.

The water flooded cars, gushed through businesses and carried trash through the street.

They add the extreme cold from the weekend is to blame.

"Metal gets more brittle when you get down to these low temperatures, so when you have sustained cold over a number of days, you just get more main breaks. That's our busy season, wintertime," said Brian Rademaekers, the public information officer for the Philadelphia Water Department.

He also says Kensington isn't the only neighborhood dealing with broken pipes.

The department had 30 reports of potential water main breaks to investigate Tuesday morning, spanning from Kensington to West Mount Airy to West Philadelphia.

Neighbors on Race and Wanamaker streets say they had been dealing with water rushing onto their block since Saturday.

"It did this last year, same pipe and everything. When it gets cold, it breaks," said Che Dodson, who lives nearby.

The water department says everyone who lives in Philadelphia should be wary of this happening in their neighborhood.

"Try not to keep valuables on your basement floor. No matter where you live in the city, there can be a main break, and you don't want your family photo album down there getting ruined," said Rademaekers.

The water department is also asking for patience as it deals with the volume of calls.

The Philadelphia Water Department issued a statement that reads in part:

"Crews are inspecting the scene and will work to address any issues identified as quickly as possible.

The Department is currently responding to a large number of reported breaks or leaks in the street across the city and as asks for patience as crews respond.