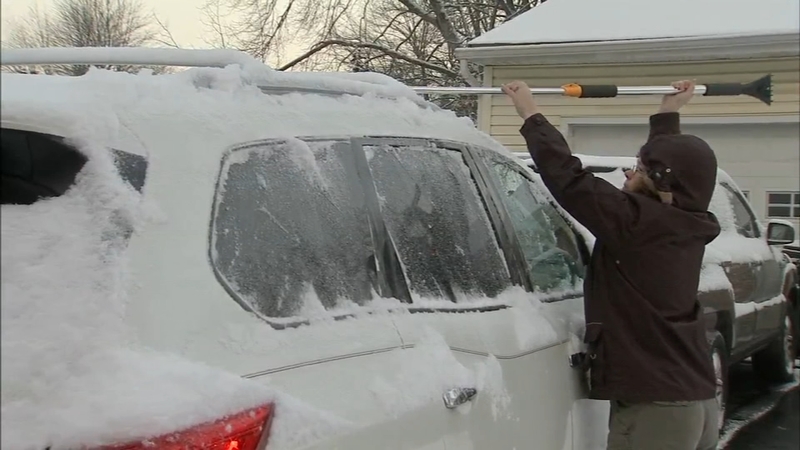 Snow falls across the region

WARMINSTER, Pa. (WPVI) -- Action News crews were out in the Philadelphia area and beyond Thursday morning reporting on the snow that fell overnight and led to slippery conditions on some roadways.

A light flurry came down in Warminster, Bucks County as early morning commuters made their way down a slushy Street Road.

They were taking it a little slower than normal on their way to work.

"Not too bad," said Jeff Jones of Newark, Del. "Major roads are pretty clear. The back roads are horrible."

"They're pretty slippery. I'm just taking my time, I'm going to be a little late for work today," said Paul Hernandez of Warminster, who told us he works in Allentown, an hour away.

As the sun rose, more people emerged ready to tackle both the day and the snow on their cars.

Katherine Scott reports from Manayunk during Action News at 4 a.m. on December 14, 2017.

Many schools in Bucks County had a two-hour delay because of the conditions.

That amounted to a birthday wish granted for one teacher and her five-year-old daughter, who loves to shovel.

"I was expecting it," said Rose McKevitt. "And I was hoping for a two-hour delay.... And I got it. It was a great birthday present! I'm so excited."

For snow removal crews, however, there was no two-hour delay.

Action News caught up with one crew that had been out shoveling, plowing and salting since 4 a.m.

"Now we are just doing all the outer walkways and making sure all the walkways are salted so people can get to work," said Tyler Keyser of Stoneworx Landscaping. "We're going around a second time now just to make sure everything is clear."

And for those who didn't have to work? They found time to lend a helping hand.

"I'm retired," said Tom Kelly of Warminster. "I've got to go shovel Ralph's across the street. I'll do a couple neighbors."