The march has taken place annually since 2017, after Donald Trump's election.
ABCNews
By Katie Kindelan 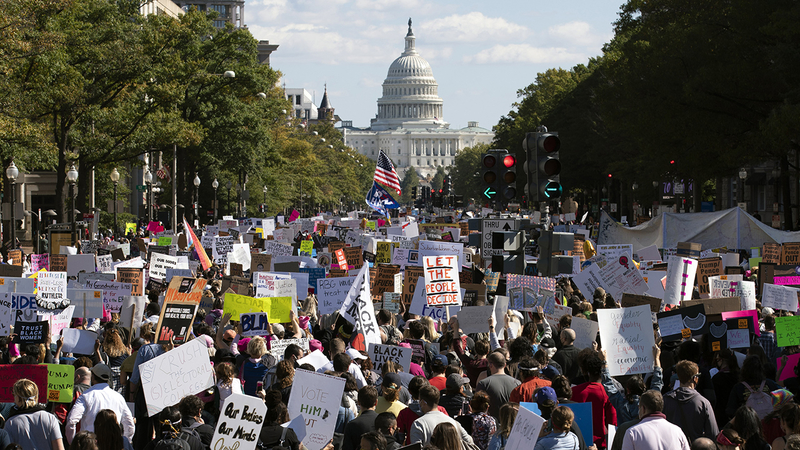 WASHINGTON -- Women's rights advocates are marching again in Washington, D.C., and other cities across the U.S. Saturday, with a focus on reproductive rights.

The fifth annual Women's March is being held on a date specifically chosen for its proximity to the start of the U.S. Supreme Court's new term on Monday.

Women's March organizers said the restrictive abortion law that went into effect in Texas in September motivated them to act now.

The law, which bans nearly all abortions after six weeks of pregnancy, went into effect after the Supreme Court rejected a request by Texas abortion providers to block the law as legal challenges continued.

The Department of Justice and the state of Texas faced off in court over the law on Friday, but the judge did not give any specific timeline on when he would make his decision on the DOJ's request for an emergency injunction.

"When the Supreme Court rejected an emergency request to block Texas's abortion ban, they effectively took the next step towards overturning Roe v. Wade. Simply put: We are witnessing the most dire threat to abortion access in our lifetime," reads a statement on the Women's March website.

The Supreme Court also is scheduled to hear in December oral arguments in a case that could be the most consequential abortion rights case in decades. The state of Mississippi is asking the justices to overturn longstanding legal precedent that restrictions on abortion access before a fetus is viable outside the womb -- around 22 to 24 weeks of pregnancy -- are categorically unconstitutional. Mississippi wants to ban abortions after 15 weeks, or even earlier.

This year's protest follows in the footsteps of Women's March protests that have taken place every year since 2017, when the first march drew more than a million people to various locations across the U.S. the day after the inauguration of President Donald Trump.

The protests have dwindled in size since the first march, but have continued across the country.

As women take to the streets this year to march, in addition to battles over reproductive rights, women have also experienced disproportionate job loss during the coronavirus pandemic and faced greater caregiving burdens than male counterparts, data shows.

Women's March organizers said that in addition to the Washington, D.C., march, smaller marches are planned from Bangor, Maine, all the way to Seattle.

The Washington march began at Freedom Plaza and is continuing along Pennsylvania Avenue toward the Supreme Court building.