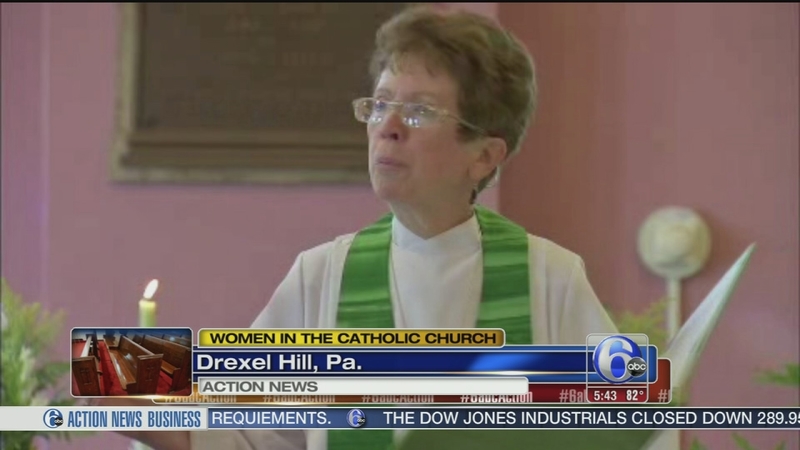 VIDEO: Women in the Catholic Church

The goal is to spread awareness about a growing trend within the Catholic Church - women ordained as priests.

Several such women are already working at a parish in Delaware County.

Every Sunday, the Community of St. Mary Magdalene meets at a Methodist church in Drexel Hill.

The prayers and readings are gender neutral and a woman always leads the service.

But these women are clear: They consider themselves priests and this a Roman Catholic Church.

"I felt that it was important to show people that there was another way of doing church and a model that was more egalitarian," said Eileen DiFranco.

These women say they heard a call to do more - a call that pained them to not answer.

In 2002 the first women were ordained by defiant male bishops in Europe. Soon after, the movement took hold in the U.S.

Over 200 women worldwide now call themselves Catholic priests. In fact, this weekend a video showing women doing things like leading mass, ministering to the sick and performing marriages will be shown at an international conference of women priests, going on right here in Philadelphia.

On Thursday, just days before the pope's arrival, the group will ordain three new female bishops.

At the church in Drexel Hill, banners read "Nothing New," and cite early church mothers, who some scholars say served in ordained roles.

But the Vatican holds Jesus and the apostles were only males and refuses to accept women priests.

In fact, everyone at this service, women priests and anyone who attends, is considered ex-communicated - a fact that doesn't seem to bother them.
"Once you've been baptized, no one can take your baptism away from you. I don't think excommunication can keep you away from God," said DiFranco.

Still, they applaud Pope Francis - especially his work with the poor - though they don't expect him to even acknowledge them next weekend - or ever.

"I feel like I've lived outside the pale my whole life and I'm very comfortable staying there. I don't mind staying there until I die," said Di Franco.

Pope Francis is no stranger to going off script and to controversy. We'll see if he shocks these prodigal daughters with some sort of embrace.