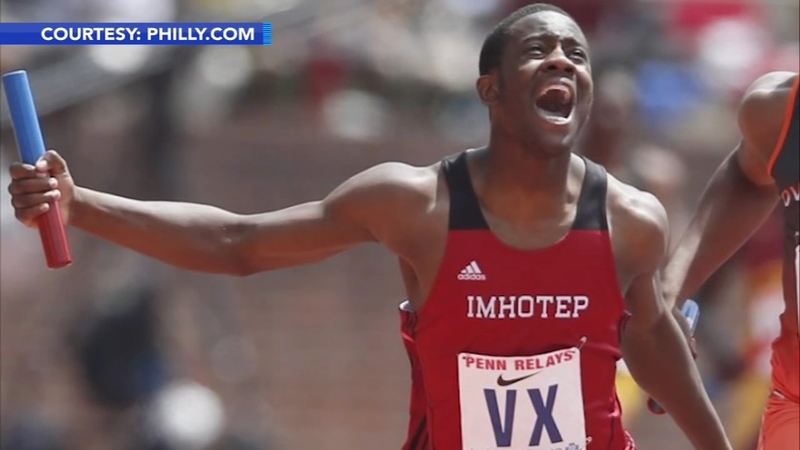 WEST OAK LANE (WPVI) -- Philadelphia police are investigating the shooting death of a local star athlete, who was supposed to report to Penn State this week on a track and field scholarship.

18-year-old Kristian Marche was shot around 9:40 p.m. Monday outside his home on the 1800 Block of East Pastorius Street in West Oak Lane.

When police arrived, they found Marche in a rear driveway suffering from one gunshot wound to the head.

"We believe there may have been some communication. He went outside. No witnesses out there - at least that have come forward at this time," said Philadelphia Police Lt. Norman Davenport. "Some shots are heard and subsequently, as police arrive, he's found in the driveway shot."

Kristian Marche is pictured above competing in the Penn Relays for Imhotep Institute Charter High School.

The teen was taken to Einstein Medical Center where he remained in critical condition until Tuesday, when he finally succumbed to his injuries.

He was beloved in the track and field community, considered one of the fastest sprinters in the state, and had earned a partial scholarship to Penn State University.

Marche was a recent graduate of Imhotep Institute Charter High School where, in addition to the track team, he excelled as a member of the football team.

Family members said their grief is so great they can't bear to talk about what happened.

Police have no motive, no suspects, and few leads to go on. They don't think this was a random crime.

"We believe this was targeted. We have no reason to believe that this was a random act," Davenport said.

Watch raw video of police on the scene following the murder of Kristian Marche on Monday, August 13, 2018.

Police are asking parents of young people in Marche's circle to talk to their kids and ask them what they know, as they try to figure out who killed this star athlete.

"There was nothing in Kristian's past that would suggest that this crime should have occurred. That's why we're making this appeal because this case needs to be solved," Davenport said.

If you have any information that can help the investigation you are urged to contact police.